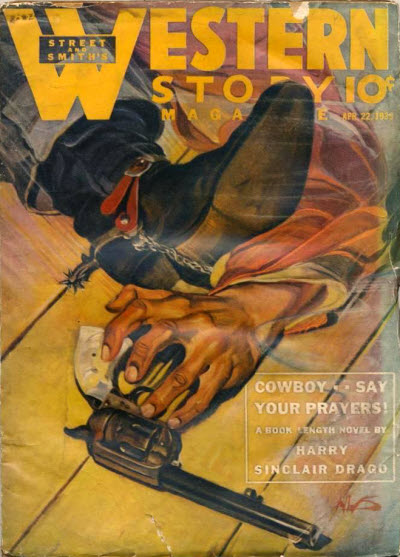 Here's another H. W. Scott special from 1939. From what I've seen browsing around the Fiction Mags Index, Scott usually a fairly dynamic artist, but working close-up as he presumably was encouraged to do this particular year gives his covers a concentrated focus that busier scenes, painted from a greater distance, often lack. The "Book Length Novel" this issue is actually fairly good-sized; Harry Sinclar Drago's "Cowboy... Say Your Prayers!" comes in at 49 pages, more than one-third of this 128 page Western Story. I haven't read too much from Drago but I have read one of his Bliss Lomax novels, The Fight For the Sweetwater, and liked it. As for the rest, Frank Richardson Pierce continues his serial Cattle Kings Die Hard, and he's usually pretty good, while John Colohan, George Cory Franklin and W. Ryerson Johnson contribute short stories.  Franklin was a late bloomer, breaking into pulps, publishing his first stories in Lariat at age 56 in 1928. His series character Chief first appeared in 1937; this issue's "Chief in Big Trouble" was the sixth of fourteen stories, the series ending in 1942. Johnson has the rare distinction of having written adventures of both Doc Savage and Mike Shayne, albeit under each character's house-author name. About Colohan I have nothing to say; perhaps people who've read his work can fill us in.
Posted by Samuel Wilson at 12:00 AM