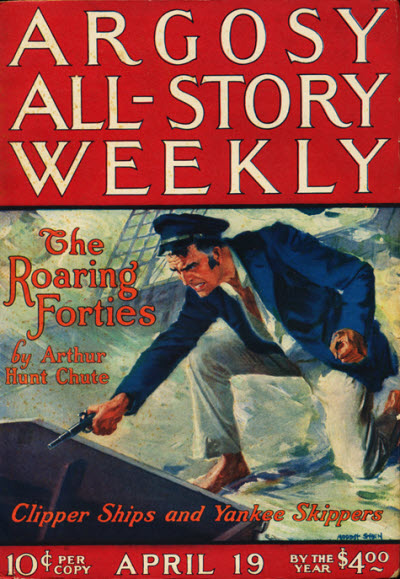 Argosy merged with All-Story Weekly in July 1920 and the two titles were given equal size in what proved for nearly six years a very top-heavy cover format. This is a 1924 issue whose contents are largely unknown, apart from the obvious cover story by Arthur Hunt Clarke, except to people who own a copy. Looking at the contents posted for the previous week's issue, we see that this one wraps up a serial by Laurie York Erskine, a name I've seen in the slicks, and continues others by Theodore Goodridge Roberts, who was still plugging away in the 1950s, by David Fox and by "The Queen of Floriana." Fox was a pseudonym for one Isabel Ostrander, and I'll bet the Queen is a female, too -- though you never can be 100% certain. According to a Heartwood Auctions listing there are two up-front female writers this issue besides the masked Fox and the likely Queen. One gets the impression that Argosy was a more diverse magazine at this time. In fact, this issue features something perhaps more rare than a female pulpster: a black pulpster in the form of Eric D. Walrond, who contributes the story "The Stolen Necklace" according to a biographical bibliography. Makes you wonder what was changing in the latter half of the Twenties besides the cover design -- though that was for the better.
Posted by Samuel Wilson at 12:00 AM