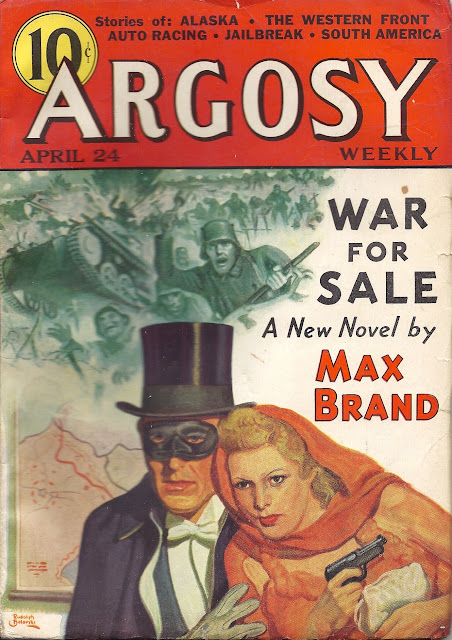 I bought this 1937 Argosy in part to complete the two-part Joel Townsley Rogers story "Locusts From Asia" that began in the April 17 issue. The other main reason was Frank Richardson Pierce's "Sourdough," which is, I believe, the first appearance of possibly his most popular character, No-Shirt McGee. He's definitely in it, and that requires an update to the Fiction Mags Index, which lists the two-parter "Sable" (October 30 - November 6) as McGee's first-known appearance. Pierce would develop No-Shirt's backstory in later tales. In "Sourdough" we learn nothing about him except his reputation as "a man of strong character, great determination, with a thorough knowledge of Northern life and its various ramifications." He is, in fact, a sourdough, and we do learn what that means.

"To qualify, you've got to have seen the ice come in the fall, go out in the spring, and lived with a squaw and killed a caribou. And danged if I've ever been able to kill a caribou," No-Shirt tells his protege, Hollister Cadwallader Algernon Jones, scion of a very wealthy British family and determined to become a sourdough in his own right. No-Shirt assures him that "A man doesn't have to graduate in all subjects to get a diploma," but this is to discourage young Jones from disgracing himself with a native girl up north. McGee has been hired by the elder Jones to keep an eye of Hollister to make sure the lad neither disgraces himself nor gets ripped off. Over the course of the 13 page story No-Shirt himself gets conned by a sharp operator and persuades Hollister to buy a "salted" tract of land, despite McGee's assurance that he can detect any attempt to salt land with gold samples. No-Shirt ends up a bystander as Hollister figures out a way to con the conman -- but McGee often isn't the protagonist of his stories. He's as much a narrative device as a character much of the time. Pierce writes in a once-popular style through which a relatively uneducated character seems to address an audience rather than write a text. Thankfully, McGee doesn't speak in any ethnic or regional dialect. He makes a few grammatical errors, but mainly he narrates past events in present tense -- or he will in later stories, but not here. I think that device gives his stories an added immediacy, while McGee's personality gives the tales an entertaining slant. He's a man of experience, presumably in his fifties or sixties, who also knows his limitations and has a sense of humor about himself and the situations he finds himself in. The No-Shirt stories are the best things I've read from Pierce, and No-Shirt's narrative voice has a lot to do with that.

I haven't had time this week to get too far into this issue, but I have read the cover story, the opening installment of Max Brand's War For Sale. For whatever reason Frederick Faust used his most popular pseudonym for contemporary spy stories instead of using another established alias or making up a new one. In this serial an international cast of super agents vie for possession of blueprints for France's Maginot Line. Like most people, Faust/Brand assumed that the Germans would make a frontal assault on that fortress network and so want plans that would reveal its weak points. That assumption gives the story a certain tragicomic quaintness. In a subplot, a French journalist disappears in the middle of a series exposing a continental super-spy, only to appear in London, where our British female spy tries to recruit him on the assumption that he and his subject are one and the same. I don't know if any man in the story will wear a mask like the gentleman on the cover, but I think the cover would be less without it.

As for the rest: 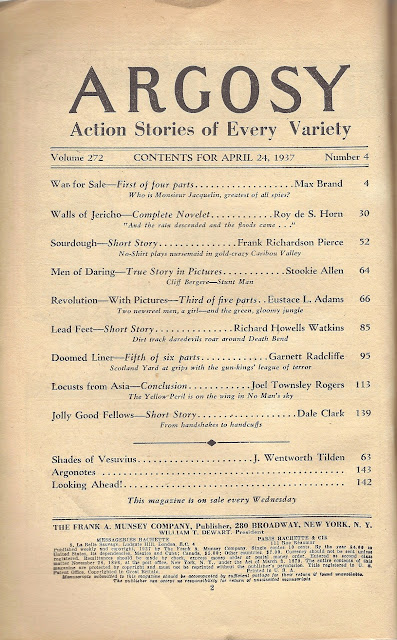 I've also read Roy de S. Horn's novelette "Walls of Jericho," in which our protagonist, framed for a crime he didn't commit, breaks out of prison as a flood breaks out, only to break back in to rescue inmates and guards while taking revenge on the con who framed him, a man he thought had been executed. There are some dramatic descriptions of the flooding, but the resolution is too neat. Our hero was framed because a certain kind of knot, known only to sailors, was used to strangle a man, and wouldn't you know? During the crisis his supposed partner in crime has to use some rope and makes a perfect sailor knot, interpreted by all as instant exoneration for our hero. I've read better from this author, usually in the historical genre.

While I haven't read these installments yet, I can vouch for Eustace L. Adams's Revolution - With Pictures and Garnett Radcliffe's Doomed Liner based on last week's reading. I'm hoping that the conclusion of "Locusts From Asia" will reveal the fantastic reality behind last week's feverish imagery of a Yellow Peril intervention by air in World War I, led by a topless woman. Rest assured that you'll find out eventually, since I intend to upload complete scans of both April 17 and April 24 in the near future. I'll brief you on the Richard Howells Watkins and Dale Clark stories later. For now, this issue is sponsored by: 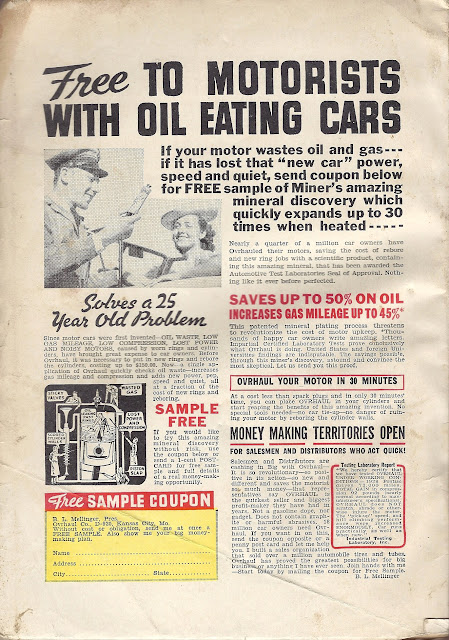