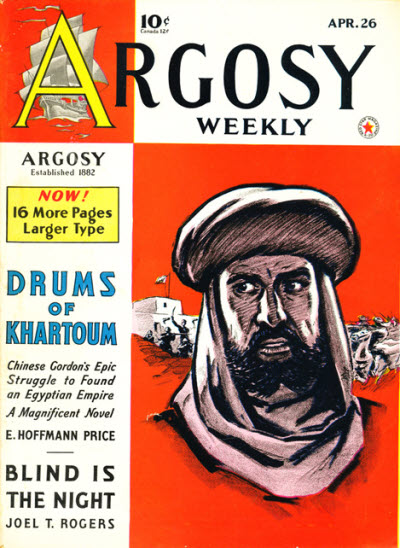 Let's review. In January 1941 Argosy transformed from a 112 page pulp to a 50 page bedsheet with triple-column pages. In March the venerable weekly kicked its page count up to 66, with double column pages and easier to read type, while retaining the hideous photo-collage standard cover template adopted in January. Now, at the end of April, the desperate Munsey corporation makes further changes. This time the page count stays the same, but the publishers grudgingly realize that they need original art on the cover to sell the contents inside. They still won't spring for a cover painting, as they haven't since last summer, but at least a pen-and-ink drawing is something to catch the eye. It advertises the opening installment of E. Hoffman Price's historical adventure Drums of Khartoum, which most likely was good stuff.  This issue's most famous contributor only appears on the letters page. According to the Fiction Mags Index, Louis L'Amour, already a veteran pulp writer, writes to "Argonotes" to question some detail of a recent Cornell Woolrich story. The rest of the fiction this issue comes from Frederick C. Painton, here dabbling in time-travel science fiction; boxing story specialist Robert Griffith; Steve "I Wake Up Screaming" Fisher, continuing a proto-WW2 serial; Crawford Sullivan, most likely telling another tale of the Bilge & Binnacle Club in "Pandemonium Goes to Sea;" western writer Ray Nafziger; and Joel Townsley Rogers with "Blind is the Night," a novel of uncertain genre. The new look definitely is an improvement on the horrors of the winter, but it still looks almost amateurish compared to fully painted covers from the good old days of not so long ago. And there are still more changes to come in this annus horribilis for Argosy.
Posted by Samuel Wilson at 12:00 AM