It pays to advertise

A couple of days ago I was looking for something interesting to report about the western pulp author George Cory Franklin. When all else fails I throw a name into the Google News Archive search engine. Among other things, this is what I found: 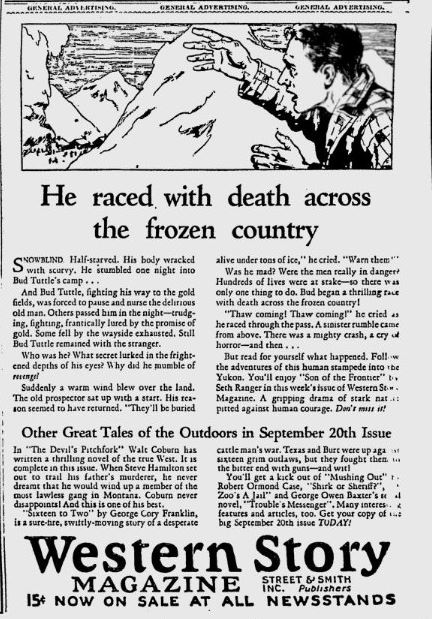 My impression is that newspaper advertising for pulps was a rare thing. I'm used to seeing advertisements for The Saturday Evening Post in papers from this period, but I didn't think pulp publishers were ambitious enough to publicize themselves the same way. I could recall only one other time I saw a newspaper ad for a pulp; it was a 1935 ad for Argosy in the New York Sun, but that almost doesn't count since the Munsey company owned both The Sun and Argosy.  The ad above, for the September 20, 1930 Western Story, ran in a Spokane newspaper. Inspired, I entered "Western Story magazine" as a search term and got another hit. 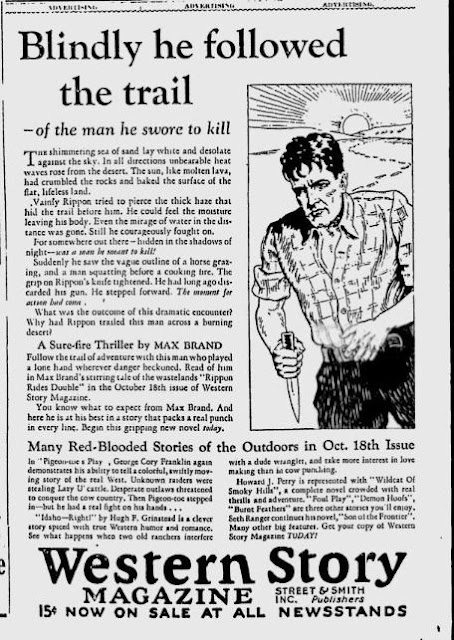 This one, also from 1930, also came from Spokane, but unless Street & Smith owned all Spokane's newspapers I presume this was a national campaign that can be found in papers not included in the Google archive. These were the only two Western Story ads I found in a preliminary search. I moved on to author names, starting with Walt Coburn. That search turned up something unique: a 1929 ad for the Fiction House pulp apparently designed specifically for the Prescott Evening Courier, which was more or less Coburn's hometown paper. 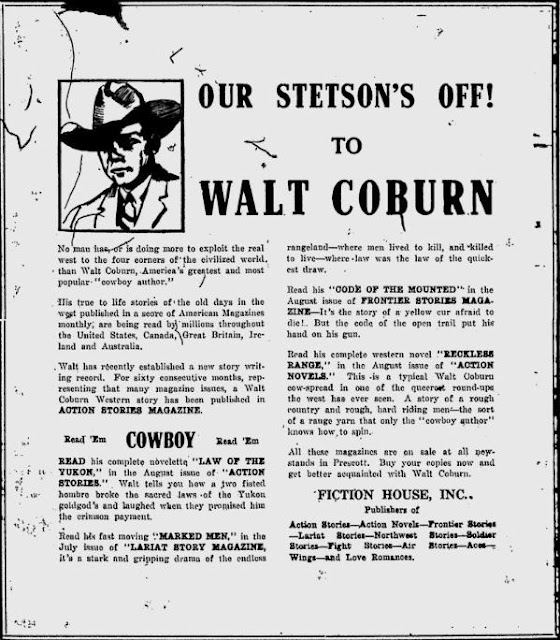 The Google News Archive is doomed to remain a fraction of what it was meant to be, but what exists promises to be a rich source of material about pulp writers, as well as a resource for stories that appeared in weekend magazine supplements. There are many more historic newspaper sources out there, and I'm curious to know whether other pulp fans and scholars have come across this sort of advertising. I'll share more as I find them, and I'll appreciate any tips (informative, not monetary) readers can offer.
Posted by Samuel Wilson at 9:00 AM