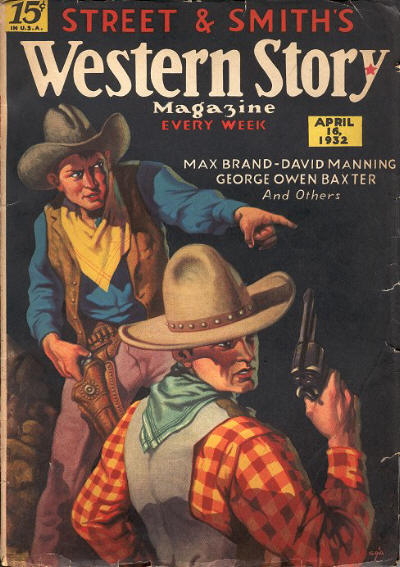 This 1932 issue of Western Story is truly a Faustian bargain. It gives you three Fausts for the price of one. Max Brand, of course was really Frederick Faust. George Owen Baxter was also Frederick Faust. On top of that, David Manning was Frederick Faust. So if you're keeping score, all three authors listed on the cover were the same person. Faust is responsible for 100 of this issue's 144 pages. The "others" are Frank Richardson Pierce (I'm surprised he didn't bring Seth Ranger along to even things up a little), George Corey Franklin and Dex Volney. That last is another pseudonym, covering for one Volney G. Mathison. Placing three stories in one issue (two of them are serial installments) wasn't unusual for Faust; he'd done it the April 2 Western Story as well. I've seen H. Bedford-Jones do the same stunt in issues of Blue Book, using his Gordon Keyne and Michael Gallister aliases -- but Blue Book was a monthly, and I'm not aware of HBJ pulling similar stunts in Argosy or Short Stories. Feats like this Western Story hat trick bolster the case for Faust, rather than HBJ, as King of the Pulps.
Posted by Samuel Wilson at 12:00 AM