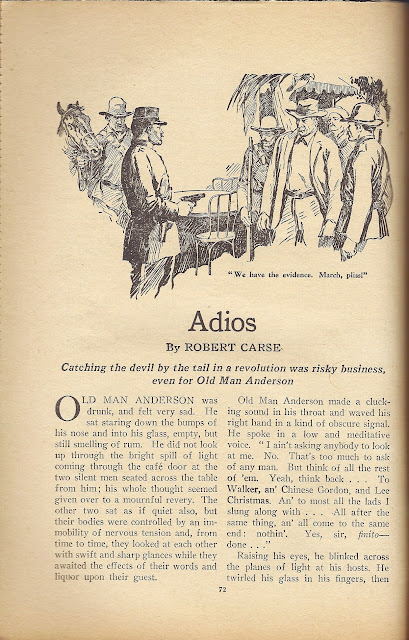 Do a Google search for Robert Carse and it'll define him as primarily a nautical writer. That may more accurately describe his postwar career, but before World War II Carse (1902-71) was a versatile pulpster, many if not most of whose stories took place on dry land. He started out as a Great Lakes sailor, but after dabbling in journalism he tried his luck in the pulps and aimed for the top. His first published story, according to the Fiction Mags Index, appeared in Adventure in December 1925. He soon made his way into Sea Stories, but by the end of the Twenties war stories emerged as his specialty. He didn't appear in Argosy until the summer of 1930, but it soon became his primary pulp market. There he specialized in Foreign Legion stories and Devil's Island type stories. His 1934 story "Roll and Go," available at unz.org, is exceptional for being a more realistic, sympathetic take on the Great Depression, possibly inspired by the movie Wild Boys of the Road, and it may be one of the few hints in pulp of leftist sympathies that got Carse's name mentioned a few times by the House Un-American Activities Committee. His work does take an anti-fascist turn, possibly along "Popular Front" lines, in the later Thirties, but whether that made him a "premature anti-fascist" I can't say. When the war came Carse, in his fortieth year, joined the Merchant Marine and saw highly dangerous service on the Murmansk Run. Returning from the war, he continued to publish in Adventure and Blue Book but concentrated more on novels and non-fiction. If there were suspicions about his ideology or loyalty, they didn't keep him from getting published in conservative establishment magazines from The Saturday Evening Post to Boy's Life in later years.

"Adios" is more cynical than political. It concerns an old American mercenary who considers himself retired from the wars, but just when he thought he was out .... Old Man Anderson is manipulated by different factions vying for control of a Latin American country, but when their schemes inflict collateral damage on Anderson's friends, he decides to be a plague on both their houses. It's a brisk read at 13.5 pages and shows Carse in good pulp form. Here's a directory of Carse's Argosy stories and serial chapters available at unz.org, and you can add "Adios" to that by following the link below.