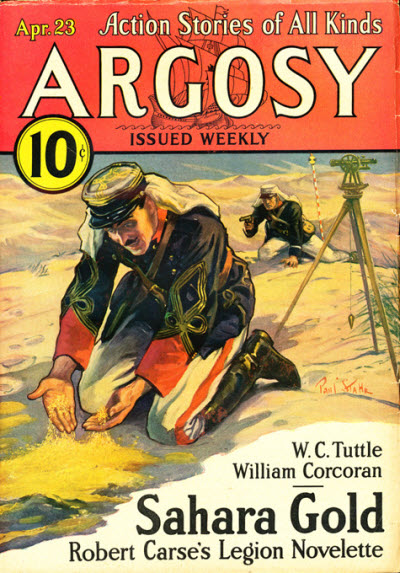 This 1932 Argosy has a solid lineup, led by Robert Carse with a Foreign Legion novelette. Ralph R. Perry and W. C. Tuttle contribute short stories; Perry's may not be a Bellow Bill but there's no reason for it to be inferior to that series. William Corcoran begins a two-parter this issue, while Ray Cummings writes part two of The Insect Invasion, Jack Allman adds part three (the conclusion) of Halloway's Debt and Sinclair Gluck contributes part four of Red Emeralds. It isn't so often that you get a neat progression like that. I haven't been impressed by Cummings and my knowledge of Corcoran is limited, but Allman and Gluck are pretty good. H.M. Sutherland has a story, too. There are enough strong authors to make this issue most likely worth having.
Posted by Samuel Wilson at 12:00 AM