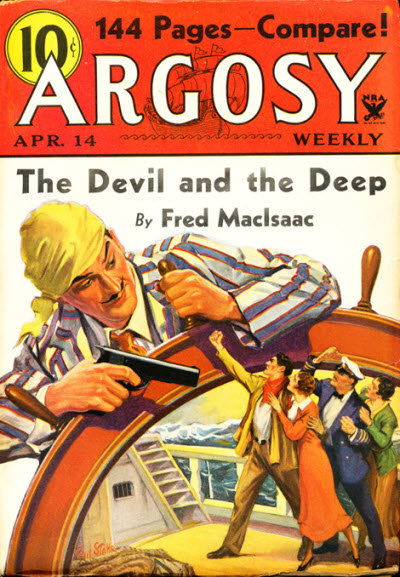 I don't own this 1934 Argosy, but you'll recall that I do own the previous week's issue. So I can say a little bit more about some of April 14's contents by referring to April 7's "Looking Ahead!" page. For instance, what's the deal with the giant pirate with the loud jacket on the cover? "Fred MacIsaac presents an unusual serial -- a queerly assorted group of passengers aboard a sailing vessel bound around the world. When mutiny threatens, they are quite literally between The Devil and the Deep." As for the pirate and his jacket, we must write those off as artistic license.

This issue has two novelettes. In Anthony M. Rud's "White Fires," "A jungle-trained white youth with strange powers falls into a crooks' haven in South America." In Weed Dickinson's "Crime in the Clouds," "It started as a press-agent's scheme and ended as the aviation crime of the year." Whatever it is, you'll have to read the April 14 number to find out.

The rest I have to figure out for myself. Karl W. Detzer's serial The Fatal Alarm got off to a good start last week so I trust it will stay good. Max Brand continues his western serial Brother of the Cheyennes, and people seem to have liked his work in that genre. That leaves Edward C. Acheson's "Alibi," apparently his pulp debut and his only appearance in Argosy. He turns out to have been the brother of Dean Acheson, the onetime U.S. Secretary of State, as well as a crime reporter for the Hartford Courant and, in later life, an OSS agent and professor of economics. By comparison, H. M. Sutherland, author of "Poker," was just a guy. He wrote a lot more than Acheson, and probably had to.
Posted by Samuel Wilson at 12:00 AM