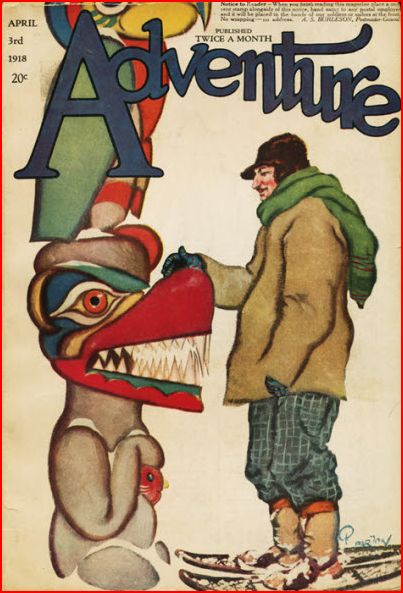 This 1918 issue is the earliest Adventure and earliest magazine to make the Calendar so far. I notice they weren't billing the authors at this point, probably not wanting to detract from the cover art. This relatively cartoony image comes from Ralph Barton -- his only Adventure cover, according to the Fiction Mags Index -- who became one of the early star cartoonists for The New Yorker before killing himself at age 39. Some familiar names -- W. C. Tuttle, Hugh Pendexter, Hapsburg Liebe -- were already contributing to Adventure. Two of the bigger writing stars of this period were the team of Farnham Bishop and Arthur Gilchrist Brodeur, who wrote historical adventures, including the exploits of medieval heroine Lady Fulvia, one of which appears in the next issue. A Fulvia story appears in the Black Lizard Big Book of Adventure Stories and is pretty good. Most likely overshadowing all these writers when this magazine was actually published was Edgar Wallace, whose Sanders of the River story this issue was a reprint from a 1914 British weekly. The lead novel (75 pages) is by Samuel Alexander White, who from his c.v. seems to have been a Northwest specialist. Ed L. Carson, Roy P. Churchill and T. Nichols contribute short stories, and that's all I can say about them. I can say no more about William Patterson White, who here continues the western serial Hidden Trails. I'm only slowly adapting my taste to the more distant past of pulp, having preferred stuff from the Twenties forward reflecting the hardboiled influence, but now I have someplace to go on the third of the month besides the predictable weeklies, so here's to variety!
Posted by Samuel Wilson at 12:00 AM