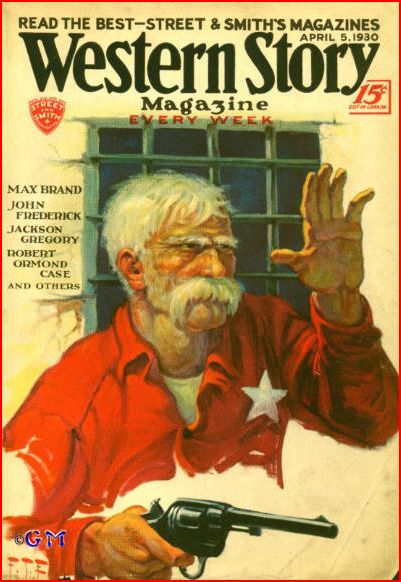 Here's a stark cover from a 1930 Western Story, though I don't know whether an old man with a gun was really an inducement to buy or not. The actual main selling point of the issue was a nearly 50 page short novel by Max Brand, "Two Masters." In a Faustian bargain, you also get the continuation of a serial published under another of Frederick F's aliases, John Frederick. Speaking of aliases, it looks like either Frank Richardson Pierce or his alter ego Seth Ranger was placing a story in this magazine on a weekly basis in this period. In this number it was Ranger's turn with the short story "Wiped Clean." The other usual suspects include Robert Ormond Case and Jackson Gregory, while the less familiar (to me) George Cory Franklin and E. C. Lincoln contribute short stories. I actually have read some fiction from the few issues of Western Story from this period available at unz.org, and they're not bad at all.
Posted by Samuel Wilson at 12:00 AM