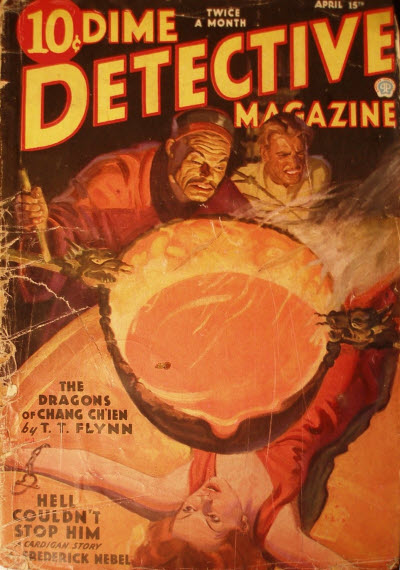 Launched as a monthly in November 1931, Popular Publications' Dime Detective graduated to twice-a-month in March 1933 and kept that schedule until the summer of 1935. It's regarded as the number-two detective pulp, critically speaking, after the legendary Black Mask. By this point in 1935 Dime Detective was aping Popular's trendy shudder pulps with cover scenes of torturous peril like this image by ace artist Walter Baumhofer. This Yellow Peril cover -- and leaving the ethnicity out of it, I suppose many taxpayers today feel like that poor woman under the cauldron -- illustrates a story by T. T. Flynn, a detective pulp stalwart before he turned into a western specialist in the 1940s. The real highlight of the issue for a pulp fan probably is (or ought to be) the Cardigan story by Frederick Nebel noted modestly in the lower left-hand corner. Nebel is probably the best pulp detective writer yet to be canonized by the wider culture. Whether his heroes are cops or private eyes (Cardigan being the latter), Nebel infuses them with a fury unmatched by any of his peers. He may be the most hard-boiled of hard-boiled writers because no one takes crap from anyone in his world. Cardigan, apparently modeled on the actor George Bancroft, rages equally at crooks and cops when they get in his way or treat others unfairly, but his sensitive side comes through in his dealings with his versatile and nearly equally hard-boiled assistant Pat Seaward. "Hell Couldn't Stop Him" strikes me as a plausible title for a Cardigan story. Altus Press has reprinted all the Cardigan stories in four volumes of print or e-books; they are definitely worth your while, and a Cardigan story alone probably makes a Dime Detective worth your time -- though I must warn you that you'll pay much, much more than a dime for one of these today.
Posted by Samuel Wilson at 12:00 AM