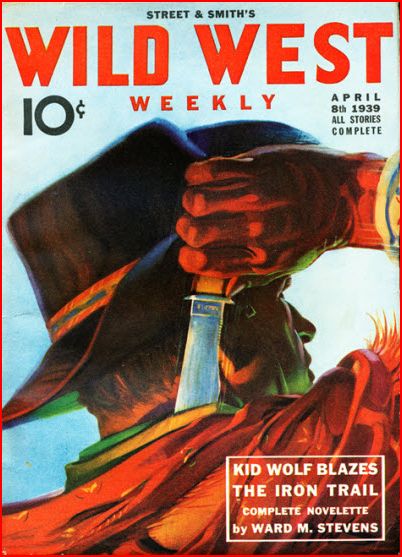 Another cool H. W. Scott cover from a 1939 Street & Smith western pulp. Wild West Weekly may have been more of a "kiddie" pulp than Western Story, but for this year, at least, they shared the same bold, eye-catching cover aesthetic. I'm sure Kid Wolf was the same as he ever had been since 1929, but this sort of fresh imagery might inspire a fresh look at the familiar hero. Kid Wolf (as written, really, by Paul S. Powers) is the star this issue, but you also get C. William Harrison's Peaceful Perkins, Walker Tompkins' Firebrand, continuing a weekly series of novelettes that must have been a serial in all but name, and F. L. Stebbins' Pecos Wilson, a comic-strip character who'd been introduced two weeks before. Ralph Thurman contributes a stand-alone novelette -- meaning presumably without a series character, and Ralph Yergen throws in a short story. Whether the writers improved their game in 1939 the way the cover artists did, I can't really say.
Posted by Samuel Wilson at 12:00 AM