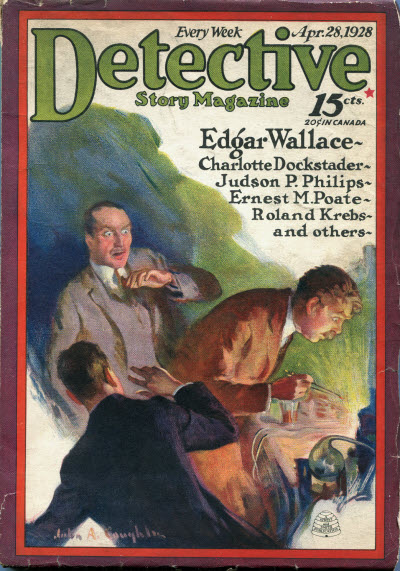 Detective Story seems to have been the primary American market for Edgar Wallace in the late 1920s, or at least in 1928. The British author appeared sixteen times in the Street & Smith weekly that year, though at the very end he moved to Munsey and spent most of 1929 in Detective Fiction Weekly. Wallace, perhaps the most popular thriller writer of his day, clearly was the star of this 1928 magazine, but pulp fans will recognize the prolific Judson P. Philips, who continues his serial The Marked Five. This issue offers more proof that pulps were more gender-balanced in the Twenties, since along with cover-billed Charlotte Dockstader Madeleine Sharps Buchanan appears with the conclusion of her serial The Hooded Horror. Roland Krebs presents the latest exploit of his team of Sheik and Simpson, who started out together the previous June and would continue until June 1930. Donald Van Riper has a short story but isn't mentioned on the cover, while Ernest Poate is mentioned on the cover, but his story isn't listed in the Fiction Mags Index. John A Coughlin's cover seems almost unfinished but I like its suggestion that something is going to go terribly wrong with man's modest-seeming science.
Posted by Samuel Wilson at 12:00 AM