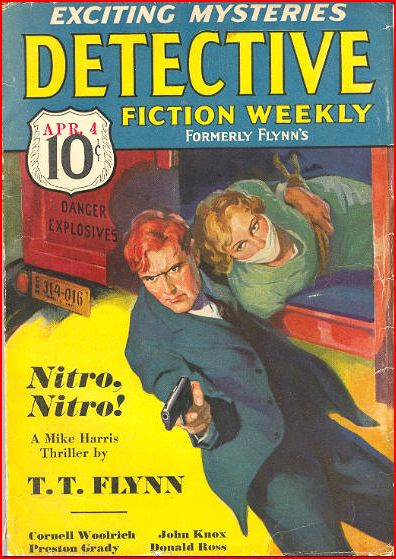 If anyone thinks of T. T. Flynn, it's probably as a western writer, his best known work being the Saturday Evening Post serial-turned-novel The Man From Laramie, the source for Anthony Mann's classic 1955 movie. But it wasn't until relatively late in Flynn's career -- no earlier than the late 1940s -- that westerns formed the majority of his output. He started out writing detective stories and in 1936, when this issue of Detective Fiction Weekly appeared, that was still his main gig. "Nitro! Nitro!" features his hardboiled team of Mike Harris and Trixie Meehan, who started out together in 1933. Only Mike gets billed on the cover but posterity treats man and woman as equal partners in the series. Another series character in this issue is Carroll John Daly's Satan Hall, who's in the middle of the serial Satan's Vengeance. Daly is a founding father of the hardboiled school of detective fiction as the creator of Race Williams for the legendary Black Mask magazine. Satan got his start in Street & Smith's Detective Story before making DFW his regular home from 1932 through the end of this serial. After taking a two-year sabbatical Satan made two appearances in Black Mask in 1938. He then showed up sporadically in Popular Publications crime mags through the war years. Two stories in Thrilling's Black Book Detective were followed by a very late outing in Columbia's Famous Detective Stories in 1954. While Daly is still known only to specialists, Cornell Woolrich has virtually been canonized; all he's lacking is a volume of his own in the Library of America. After spending much of his time at Popular's Dime Detective in 1935, Woolrich was placing more stories in the Munsey pulps in 1936, both in DFW (see this issue's "Mystery of the Blue Spot.") and Argosy. Along with these big names there's a serial by Donald Ross, who turns out to be the prolific Fred MacIsaac, who'd published two serials in DFW under that pseudonym the previous year. In addition, there's a novelette by Preston Grady, who's a mystery to me, a short story by Houston Day, and Richard Wormser contributes a puzzle, of all things, while Robert W. Sneddon contributes a nonfiction piece on werewolves. The John Knox mentioned on the cover doesn't actually contribute anything, according to the Fiction Mags Index, but the lineup looks pretty good without him.
Posted by Samuel Wilson at 12:00 AM