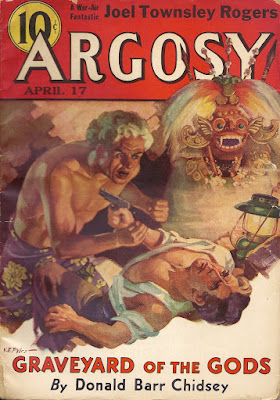 Donald Barr Chidsey (1902-71) merited a New York Times obituary for his nonfiction writing, with a passing mention of his novel writing. His voluminous pulp output, perhaps predictably, went unmentioned. Chidsey broke into pulps at the same time he was publishing irreverent historical biographies like Sir Humphrey Gilbert: Elizabeth's Racketeer (which can be found on the Internet Archive). He published his first pulp story in Street & Smith's Detective Story in July 1931, then turned up in Adventure at the end of that year. He picked up the pace in 1932, creating his long-running hero Nick Fisher for Detective Fiction Weekly and making his Argosy debut that summer. Chidsey soon was publishing all over the place, including the two most prestigious detective magazines, Black Mask and Dime Detective. For the latter he created the team of Morton & McGarvey, which he moved to DFW after an apparent falling out with Popular Publications that saw him stop publishing in Adventure after 1936. By 1937 he published primarily in the Munsey pulps (DFW and Argosy) with occasional forays into the slicks. Despite some early historical stories that presumably would be in keeping with his non-fiction interests, Chidsey became primarily a detective and crime writer, specializing in exotic locations, particularly for the Nick Fisher and Eddie Savoy team. He diversified in the war years, returning to Adventure and publishing more in Blue Book. He stuck around pulp almost to the bitter end, publishing his last pulp fictions in Popular's Fifteen Detective Tales in 1954. "Graveyard of the Gods" is a typical Chidsey product of the mid-thirties, though it doesn't have a detective as a central character. Point of view shifts from the Hawaiian native who drunkenly divulges a secret to the kidnappers who exploit it to the detective who tracks them and inadvertently tips off the native, a sacred guardian who must enforce a powerful tabu. It's a briskly paced story enlivened (or burdened) with pulp exotica and if you dig that sort of thing, or if it doesn't bother you -- and you wouldn't be a pulp fan if it did -- you should enjoy this story from the golden age of Argosy. My scan comes with the wild V.E. Pyles cover that I use for wallpaper, the early ad pages and this issue's table of contents. You can download it from the link below: