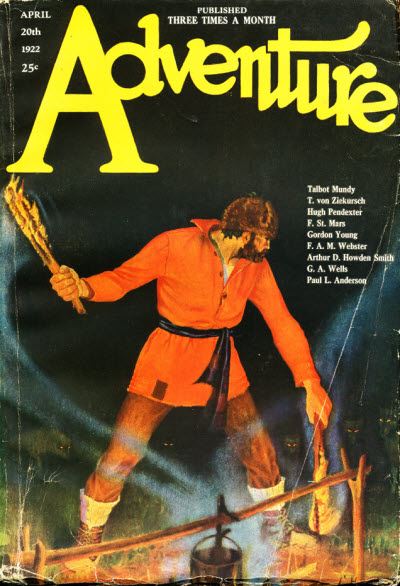 The big guns of this 1922 issue of Adventure are Talbot Mundy, who contributes a complete Jimgrim story, "The Woman Ayesha;" Arthur D. Howden-Smith, who concludes a three-part Crusades-set serial A Son of Strife; Hugh Pendexter, who begins the serial Pay Gravel; and Gordon Young, who closes out the fiction part of the issue with the story "Shipwreck." The lesser lights include animal story specialist F. St. Mars, Paul L. Anderson, T. von Ziekursch, F.A.M. Webster and G.A. Wells. I'm not familiar enough with any of the last four to offer any comments, but substantial contributions from Mundy and Howden-Smith, at least, make this issue most likely worth having. As usual under Arthur Sullivant Hoffman's regime, the rather ominous cover probably has nothing to do with any of the stories inside.
Posted by Samuel Wilson at 12:00 AM