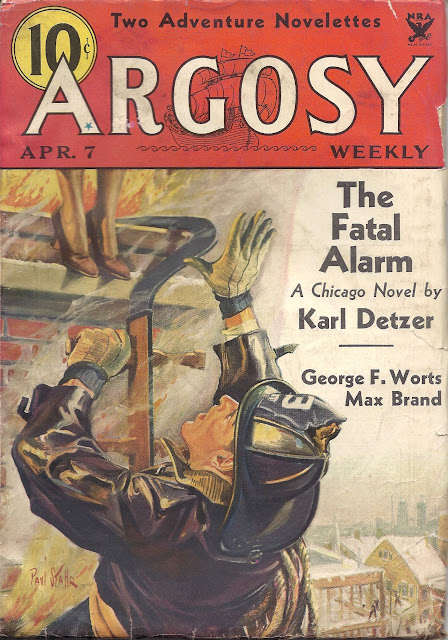 This 1934 Argosy is from my own collection. One of the "Two Adventure Novelettes" advertised on the banner is Ralph R. Perry's "The Wrong Move," which I'll be sharing with you later today. It's one of seven Bellow Bill Williams stories Perry published in Argosy that year, his most productive with his tattooed pearler. Let's find out a little more about the rest of the issue: 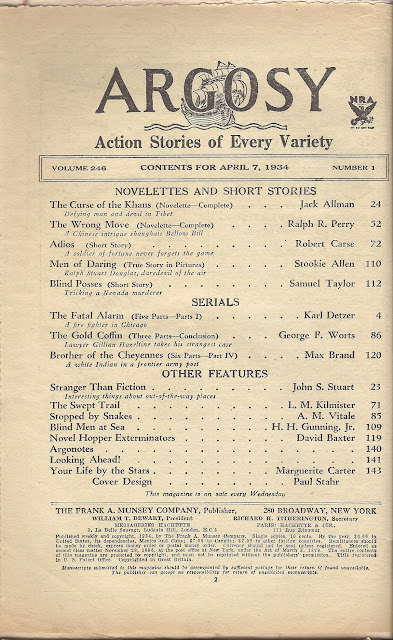 Cover author Karl Detzer specialized in firefighting stories. I like what I've read of him, and the first installment of The Fatal Alarm was pretty entertaining. Billing it as a "Chicago novel" rather than a "fireman novel" is apt, because Detzer is attentive to the role of petty politics in a firefighter's career. I haven't read more past this issue (there's an installment in the unz.org trove) but I'd consider a chapter an incentive when considering issues for future purchase. The other adventure novelette is Jack Allman's "The Curse of the Khans," a survival story set in Tibet back before the present Dalai Lama became a global icon of benign spirituality. The pulp Tibet, by comparison, is a barbaric place where the lamas often are far from benign. That may be unsettling if not scandalous to some modern readers, but on its own terms Allman's is a decent action story. Better still is Robert Carse's short story "Adios," in which an old American mercenary is drawn reluctantly into a Latin American revolution, only to take revenge on both sides. The other serials are Max Brand's Brother of the Cheyennes, which I find hard to judge, having dropped in the middle of it, and the conclusion of George F. Worts's The Gold Coffin, featuring his fighting defense attorney Gillian Hazeltine. It was the first bit of Hazeltine I ever read and I wasn't really impressed. Lawyers growl at one another a lot to set the overwrought tone. Read a Hazeltine, I say, and you'll appreciate how good Erle Stanley Gardner really is at this sort of thing. Lest I forget, Samuel Taylor contributes a western short story with a stuttering hero. The hero narrates the story, but Taylor thankfully refrains from having him narrate with a stutter. Instead, Stuttering Steve narrates in the colloquial present tense I associate with Frank Richardson Pierce's No-Shirt McGee -- not quite dialect, but not quite formally grammatical, either. Overall, it's a strong issue from one of Argosy's strongest years. I may share more of it with you besides the Bellow Bill story, and if I feel really ambitious I may scan the whole thing eventually. For now, this issue was sponsored by: 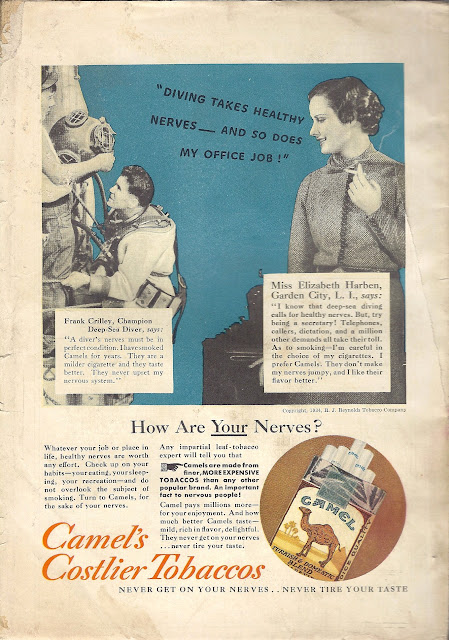