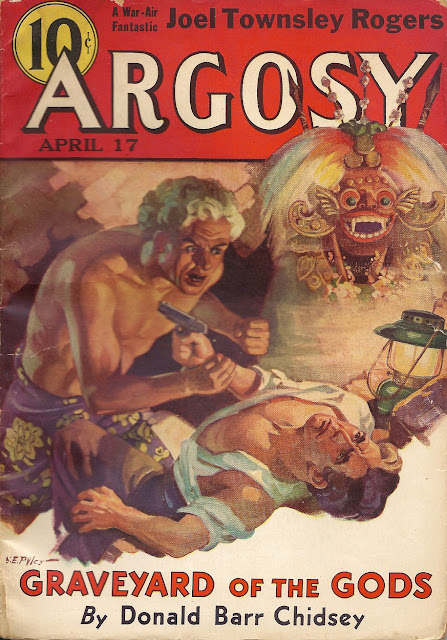 This cover should look familiar to you. The April 17, 1937 Argosy was one of the first issues of the magazine I acquired for myself, in large part because of that wild V.E. Pyles cover. At this early point in my collecting, after reading my way through the Argosy collection at unz.org, Donald Barr Chidsey was one of the authors I knew I liked; another early purchase got me his three-part 1938 serial Midas of the Mountains. "Graveyard of the Gods" almost lives up to that image. Some gangsters in Hawaii learn from a drunken native that a certain small island is taboo, the native alone visiting it to perform sacred services, and figure its isolation will make it an ideal spot to stash a kidnap victim. They fail to anticipate that the normally amiable native might get suspicious, much less wise to their sacrilegious scheme, though they might have been in the clear if not for a detective asking questions. It's a solid, punchy story that you'll be able to see soon. For now, let's see what else this issue has to offer: 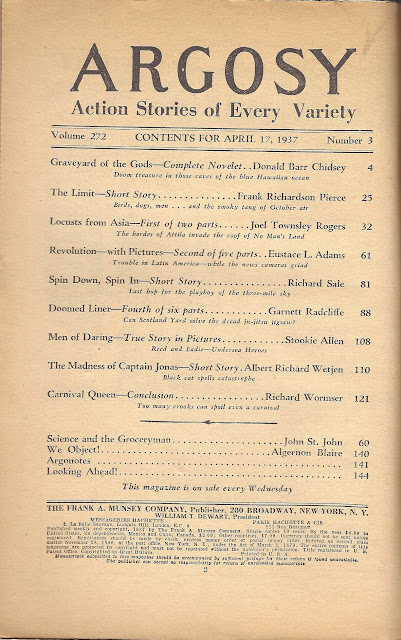 Frank Richardson Pierce's "The Limit" is uplifting without getting too mawkish; a lumberman and hunter who loses a leg in an accident is demoralized, convinced that he'll never hunt again, until friends hook him up with a three-legged pointer to inspire him. Joel Townsley Rogers' "Locusts From Asia," as this week's Argonotes explain, was written back in 1928 but subsequently lost by the author for eight years or so. It's an odd, purple-prosed affair about British and German planes alike being attacked at the height of World War I by a mysterious fleet of advanced planes piloted by barely-human easterners and commanded by a feral-seeming topless woman. This week's first of two installments is padded by a protracted encounter between a German ace and his mentor, a Jewish scientist, in which the ace demands superweapons to fight the British with. After he stalks off, the scientist is captured by the mystery fleet. I found "Locusts" severely overwritten, but I found the premise just outrageous enough to keep me interested -- which makes it a good thing that I have next week's issue, too.

Next week will also give me another installment of Eustace L. Adams' Revolution -- With Pictures, another of his kickass serials from a period where he seemed to bat them out effortlessly. In this one, a newsreel team gets embroiled in a Latin American civil war. I don't have the first installment but an Argosy recap will usually get you up to speed easily enough, and Adams writes well enough to make even a fragment entertaining. I found the same to be true for this week's installment of Garnett Radcliffe's Doomed Liner, which is more of a mystery thiller than the sort of disaster story the title suggests. Some maniacal jiu-jitsu expert is on a murder spree -- his finishing move is the "bum's rush" --  and may be part of some bigger conspiracy. This installment takes place mostly on land and is primarily detective work, though the Scotland Yard hero has a hairsbreadth escape from a flood of water and rats at the climax. I haven't read much by Racliffe but he impressed me this time. I'm still working my way through the conclusion of Richard Wormser's Carnival Queen but I read the original installment and liked it some time ago and I'm pretty confident in Wormser as a rule.

Richard Sale's "Spin Down, Spin In" is an ultimately predictable tale of a widow who blames a flier with a bad reputation for her bereavement and learns flying in order to seduce him into a murder-suicide-by-crash scenario. It's predictable in its happy ending, but I suppose that if the widow followed through it would only be a gruesome anecdote. That leaves "The Madness of Captain Jonas" by Albert Richard Wetjen. During my exploration of the unz.org trove Wetjen became one of my favorite writers for Collier's, a slick that ran a lot of pulpy stories. His Wallaby Jim stories (eventually adapted for film) seem awfully violent for a family magazine, but he did a lot of more conventional sea stories as well. Wetjen didn't publish in Argosy very often -- his main pulp hangout was Fiction House's Action Stories -- so I wonder whether his Argosy stories are Collier's rejects with not enough action for Action Stories. There's not much action in "Captain Jonas," which is almost a Twilight Zone type story, the captain's madness being a superstitious nature that infuriates the new mate who narrates the story, and the twist being that a navigation decision attributed to supernatural influence, but resulting from a mundane accident, allows the crew to survive a fog without running aground. The short story is an entertaining compendium of absurdities effectively told with enduring dismay, and while it lacks the blood and thunder of Wetjen in full pulp mode it fits in Argosy just fine.

As of now I've scanned the Chidsey story and will make it available for download later today, and now that I have that head start I've a mind to do a cover-to-cover scan of a pretty decent Argosy from one of the venerable weekly's last good years. At my rate of work I hope to present the complete issue for download before the end of the month. I think you'll like it. And lest we forget, this issue was sponsored by: 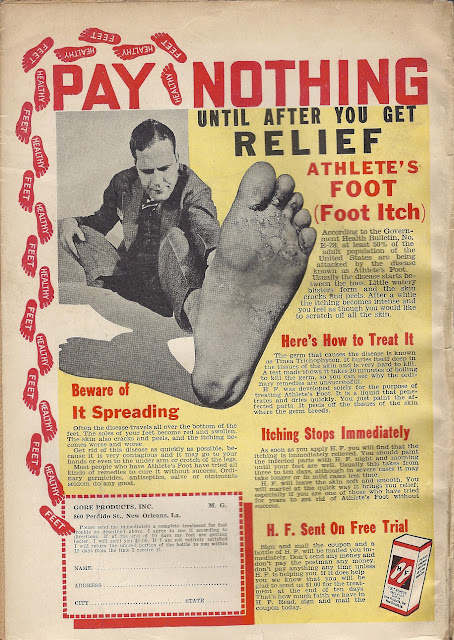