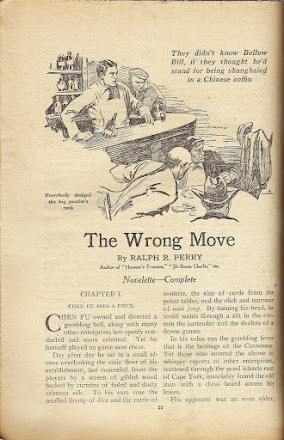 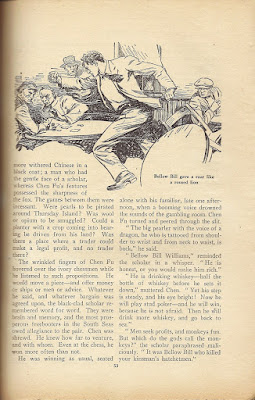 Bellow Bill gets slipped a Mickey and wakes up in a box on a boat. He isn't meant to suffocate because someone has placed weapons in the box with him, but what he's meant to do with them, not to mention where he is, exactly, are a mystery to the tattooed pearler. We know some of what's up because Ralph R. Perry has called our attention to the chess-playing Chinese who drugged Bill in the first place. In one sense Chen Fu treats Bill as a pawn in a game we only gradually understand, but he actually sees Bill as a queen -- chess is the only context where that's possible -- with tremendous disruptive power. Soon enough, Bill learns that he isn't welcome on the ship. Soon after that, he learns that he's not the only prisoner on board. To say anymore would spoil a well-plotted tale in which Bellow Bill must depend as much on his wits as on his strength. Suffice it to say that Bill is no man's chesspiece. This is one of seven Bellow Bill stories that Perry published in 1934, a year that saw either Perry's peak of productivity -- there were only three Bellow Bills the following year -- or the character's peak of popularity. None of the 1934 stories are available in the unz.org trove, but I have four of them. You'll see the other three from my collection, at least, later this year. For now, enjoy twenty pages of prime pulp action by clicking on the link below: