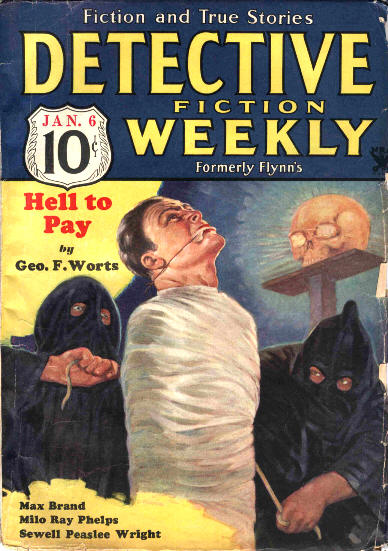 I can't say much about this 1934 issue of Detective Fiction Weekly, but that cover is pure pulp. It reminds me a little of the "shudder pulps" that were becoming popular around this time, but DFW never really went that way. The mummy wrapping illustrates the lead story by George F. Worts, who may have been as close to a house star the Munsey line had at the time. Worts spent most of his time writing for Argosy, publishing occasionally in the slicks and starting a western comedy series for Blue Book in 1935. At Argosy Worts was the author of long-running series about the dynamic defense attorney Gillian Hazeltine, a Perry Mason precursor who feuded with a corrupt D.A., and Singapore Sammy, a globetrotting adventurer in pursuit of his unscrupulous father. As Loring Brent, Worts had yet another series of oriental adventures starring Peter the Brazen, named for his complexion rather than his attitude and thus arguably pulp fiction's original man of bronze. He had no series characters in DFW, as far as I know, but contributed the occasional stand-alone story like this one. I'll have more to say about Worts when he shows up in Argosy. Also noteworthy here is a serial chapter from Frederick "Max Brand" Faust. You never know when or why Faust will use his best-known pseudonym or one of the others. It doesn't seem to be genre-specific since he published both his westerns and his Dr. Kildare stories as Brand, though some of his alternate tags were associated with specific genres, e.g. George Challis's historical swashbucklers. Adding to this issue's interest for me is a Donald Barr Chidsey story that apparently didn't merit a mention of his name on the cover. Since Chidsey was placing stories in Black Mask around this time, this one, "Just Another Bum," is probably decent but not up to the top detective pulp's standard. Before this year was out he was showing up in Dime Detective, too, marking him as an elite mystery writer. Chidsey and Worts together might make this issue worth having, but they're both hit-or-miss writers in my opinion. I would like to know the story behind that cover, though.
Posted by Samuel Wilson at 12:00 AM