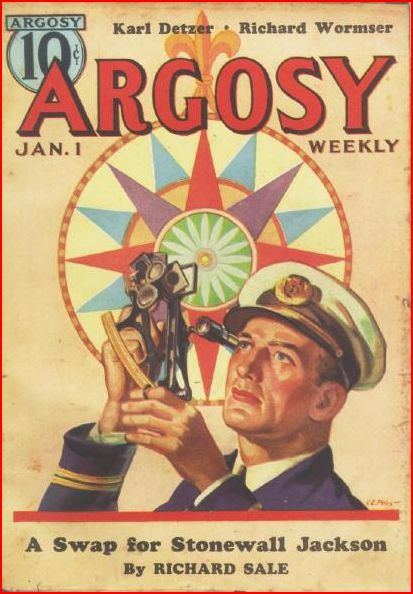 ARGOSY is considered the original pulp magazine. Originally a weekly in the late 19th century, it went monthly from 1894 to 1917. It resumed a weekly schedule until the fall of 1941. One of the so-called "big four" general-interest pulps (along with Adventure, Blue Book and Short Stories), Argosy was the cheapest of them (at 10 cents) and, as a weekly, the most frequent. Naturally it ran more serials than the others, as many as four going on at the same time at different points in the magazine's history. You could find nearly every genre in Argosy except for romance and, arguably, horror. You could expect to see a western story almost every week, along with some modern-dress adventure story and probably a period adventure story. Modern stories often spanned the globe, following explorers, hunters, spies and badass sailors to exotic places filled with people who were indisputably (if often also stereotypically) different from you, the reader. Argosy commonly promised "Action Stories of Every Variety" and usually delivered. Since we'll see Argosy on the Calendar more often than any other pulp I'll save further comments for the year to come, apart from introducing this particular issue.

The cover by V. E. Pyles doesn't illustrate any of the stories in the January 1, 1938 issue. Pyles isn't exactly taking advantage of a recent change in Argosy's cover design that eliminated the red band across the top third that had been virtually the magazine's trademark. The redesign gave cover artists more room to work with and the results were sometimes impressive, but I've come around to preferring the old red-band style, if only because that's what's on the covers in the years I consider Argosy's best, just a couple of years before this issue appeared. The feature story this week is Richard Sale's "A Swap for Stonewall Jackson," which is, as you may have guessed, a Civil War story. Sale is best known in pulps for his detective stories. He graduated to screenwriting and directing (as did fellow pulpsters Alan LeMay and Charles Marquis Warren, the latter of whom may be getting more attention lately than in a long time). I haven't read this particular story (but you can!) but I've read some other Civil War stuff of his and it's not his best stuff. The other star writers this issue are Karl Detzer, who specialized in firefighter stories but here continues his World's Fair Mystery serial, and Richard Wormser, whose "Isle of Yellow Girls" was the latest in his series about Dave McNally, a kind of younger, tougher Carl Denham (he compares himself with Frank Buck, but which name do you recognize?) who travels the world searching for exotic attractions to sell to circuses, zoos, theaters, etc. I'll let him introduce himself:

"I've fought," McNally said, "in every latitude and longitude on this Earth.From Hey Rubes in Iowa to bandits on the Caucasus, from cannibals in Borneo to headhunters in Africa. I've been in eight revolutions, three wars, five race riots and so many fights I've scar tissue from the Achilles tendon on my right heel to the mastoid bone on my left ear. I--"


After which McNally faints from a fever. He may have been a little delirious, but it sounds like an interesting career. "Isle" is a good story that keeps you guessing about what sort of trouble McNally has gotten himself into as the trouble escalates to apparent murder. Wormser disrupts expectations early by introducing a character as a "Kanaka," which was the standard term for South Sea island people who are usually portrayed in pulp as simple savages. This story's Kanaka, however, is a high-school educated Hawaiian (and an Eagle Scout) who often seems to know more than McNally, especially about what's really going on in the story. That actually makes him a suspicious character, especially when he seems to be consorting with some Japanese, but I'll let those who are interested figure things out themselves by reading the story. You'll note that the interior artist is teasing readers just a bit by having one of the yellow girls barely show some nipple on the opening page. That bit of exploitation aside, "Yellow Girls" refreshingly avoids the most blatant stereotypes of pulp fiction without succumbing to the temptation to make everyone generically alike. McNally is an entertaining character whose adventures have amused me in the past. I have some more McNally stories in my personal Argosy collection that I hope to share with you down the line. For now, the entire January 1, 1938 issue is available as part of the pulp trove at unz.org, where you can download individual stories for your reading convenience. This issue also has one of C. F. Kearns's stories about his Northwest hero Handsled Burke, which are usually good stuff, a serial chapter by one of my favorite pulpsters, Eustace L. Adams, and the conclusion of a serial by Lester (Doc Savage) Dent that isn't (based on my reading of an earlier chapter) one of the great man's finest hours. Taken as a whole, this is a modest sample of what Argosy has to offer, and there is more and better to come.
Posted by Samuel Wilson at 12:00 AM