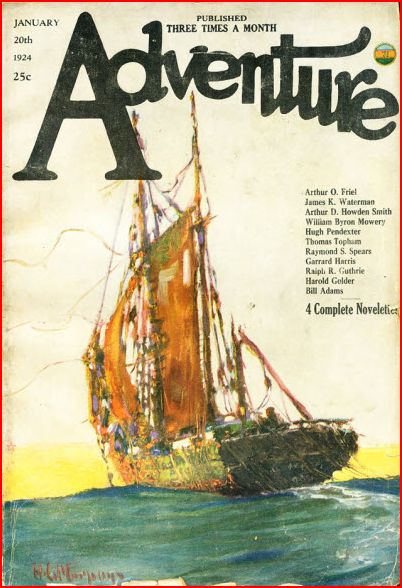 Adventure adopted a thrice-monthly schedule in the fall of 1921 and stuck to it until the spring of 1926. That period is probably the high point of the magazine's long run. Editor Arthur Sullivant Hoffman somehow managed to maintain a high standard of quality throughout the period, cranking out 192 pages at a time. You'll notice that, compared to a successor in 1931 whose handiwork we saw a few days ago, Hoffman kept his covers understated. He doesn't promote an individual story but simply identifies his authors who, after all, are the stars of the magazine. Two in this 1924 issue really stand out. Arthur O. Friel specialized in adventures set in South America, ranging from the whimsical to the epic. He may be the most completely forgotten of Adventure's elite writers, if only because he left no real heirs in his geographic subgenre. But the long stories and bits of serials of his I've read from this period are often spectacular. Better still in this lineup, however, is Arthur D. Howden-Smith. This issue has one of his tales of Swain the Viking, an arrogant, no-nonsense personality who takes crap from no one, be it his jarl or his wife. Howden-Smith really tapped into something archaic yet accessible in Swain, a figure who would be a monster if he lived today but could be a hero on his own terms. I've enjoyed every story in the series that I've had a chance to read. Frontier story specialist Hugh Pendexter is the other big name in this number, which finds him in the middle of of The Long Knives, a five-part serial. An optimum issue of Adventure would have something from Harold Lamb, Talbot Mundy or Georges Surdez as well, but Friel and Howden-Smith on their own would make this particular issue worth having.
Posted by Samuel Wilson at 12:00 AM