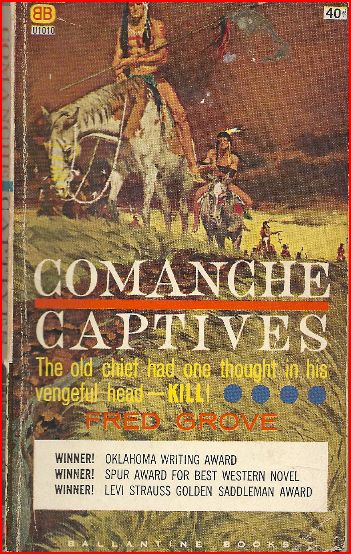 My copy of Fred Grove's Spur award-winning novel is the third paperback printing from 1964, so the cover copy can crow about all the awards Grove won for the book. Grove studied writing under two pulpsters in college, Stanley Vestal and William Foster-Harris, but was a latecomer to fiction. His first published story appeared in the December 1951 Popular Western (Thrilling), and he has only twenty pulp credits total through 1957, according to the Fiction Mags Index. In a postscript to this edition, the publisher notes that Grove has "some Osage blood on the maternal side of his family," though for a long while it looks like this won't influence his novel's view of Indians.

For your information, the title refers to Comanches who are captives of the U.S. government, not whites who are captives of the Comanches. Our protagonist, Lt. Baldwin, is tasked with transporting the band of old chief Hard Shirt to a reservation with a skeleton crew of "defective" cavalry and a young Quaker schoolmarm. Rachel Pettijohn is an idealist whose compassionate solicitude for the Comanches clashes with Baldwin's bitter realism. His fiancee died (of a broken neck) when Indians attacked the stagecoach transporting her west and caused it to wreck. He is a realist rather than an outright bigot because he recognizes that injustices have been done to the Indians, yet believes that they are irreconcilable enemies of white civilization. They are motivated by hatreds that, however understandable, mean they cannot be trusted. Baldwin warns Rachel constantly that the Comanches will try to kill her whenever they get a chance, no matter how she tries to help them, because they can only see her as a white enemy. Here's a typical Baldwin argument:

"I don't know how many times I've warned you to stay away from the Indians," he said, reproving but not roaring, "You pay no attention. You go right back and run into trouble. You've got to remember certain things about Indians. They're wild, superstitious. Closer to nature than we are. They don't see life as we do." He was letting his thoughts run, impressing them. "How can you expect them to love white people when we are their bitterest enemies?"

Or later, shooting down another of Rachel's moments of optimism: "I was wrong. You don't know Comanches -- not yet. Any Indian will fawn over you if it fills his belly. Then cut out your heart the next day." Despite all this, you should not be surprised to learn that Baldwin and Rachel fall in love. Let's face it; that's why there's a woman in the story. It may be slightly less surprising to learn that Rachel turns out to be more right about the possibility of reconciliation than Baldwin had been willing to admit. While the narration early seems to reflect Baldwin's view of the Comanches -- Hard Shirt appears like anything but an honorable, dignified warrior -- a common ordeal eventually bonds the white protagonists with the Comanches as all end up besieged by a mob of Tejanos bent on lynching Hard Shirt and the other "bucks" among the captives. Like many such novels, Comanche Captives gives us a spectrum of characters illustrating white men's almost limitless capacity for depravity. Besides those late-arriving Tejanos. Baldwin has three enemies in his own unit: Van Horn, a disgruntled former fellow officer broken to the ranks for drinking; Stecker, a brutal bully with eyes on Rachel; and Ives, a cunning malcontent. If there's a subtext to the novel, it may be that while the Comanches' hatred and viciousness have obvious, readily recognized roots, whites seem capable of equal or greater viciousness for less obvious, less intelligible reasons. If the Comanches are Stone Age savages to Baldwin, his white antagonists appear downright evil.

The three antagonists don't quite live up to their potential. Van Horn disappears from the novel without getting any comeuppance after betraying Baldwin to the Tejanos. Grove seems to be setting Stecker up for an attempted rape of Rachel, but he and Ives are eliminated abruptly after a rash attempt to frag Baldwin. Comanche Captives proves episodic in construction; I could have believed it started existence as a serial, but Grove never did one of those in the pulps. The attack of the Tejanos comes out of nowhere -- except that it's spoiled in the teaser on the first inside page -- and serves mainly to set up the almost too-good-to-be-true finale in which Hard Shirt's people finally (and fully, presumably) embrace Rachel and Baldwin as friends, changing their name for the latter from Stone Heart to Stands Brave. Rachel and Baldwin embrace each other as well, and while the romance plot is by-the-numbers stuff, Comanche Captives is worthwhile for its action scenes and its overall refusal to idealize or demonize the Indians. At 140 pages, it's efficiently satisfying in a way that no longer seems profitable for the publishing industry, but writers (and editors) today could learn lessons from authors like Grove. 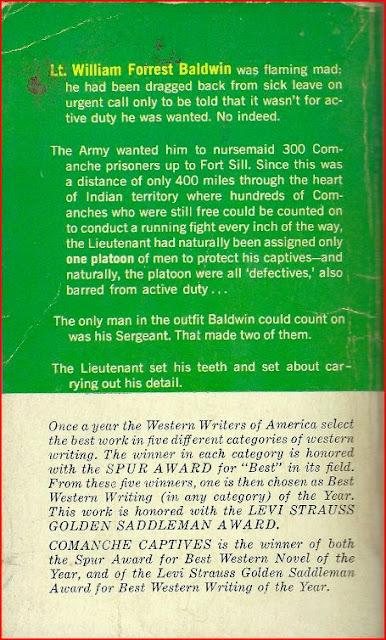