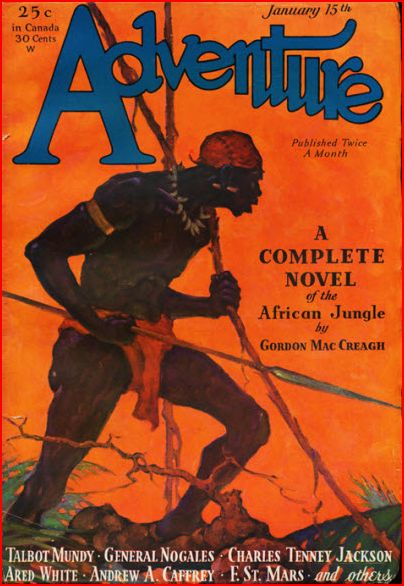 Adventure may be the greatest pulp that ever was. Starting as a monthly in 1911, it soon went biweekly and went thrice-montly at its peak in the early-mid 1920s. Issues from that period, edited by Arthur Sullivant Hoffman, are awesome assemblies of master storytellers: Harold Lamb, Talbot Mundy, Arthur O. Friel, Arthur D. Howden-Smith, Leonard H. Nason, the young Georges Surdez and many others in dense 192 page packages. Adventure's "Camp-Fire" section was the best letter column in the pulps, though it often gave more space to authors arguing with each other -- especially during an epic 1925 debate over Talbot Mundy's treatment of Julius Caesar in his Tros of Samothrace stories -- and to Hoffman's own rants against gun control -- than it did to mere readers' opinions. Hoffman was gone by the time this 1931 issue was published, and while longterm fans feel Adventure declined directly after his departure I've found issues between 1927, when he left, and 1932, when the Depression forced the magazine to halve its size, to remain quite formidable. The cover story is one of Gordon MacCreagh's tales of Kingi Bwana, an American in Africa. Kingi (or just plain King) has a Mutt and Jeff pair of African sidekicks, the wizened (and wise) Kaffa and the mighty Masai Barroungo. You can see an echo of their byplay in the similar team of N'Geeso and Tembu George in Fiction House's Ki-Gor series in Jungle Stories. I've just read a later Kingi Bwana story from a 1934 Adventure and it kicked ass in a kind of hateful way that I may discuss sometime.  The other big name this issue is the aforementioned Talbot Mundy, largely forgotten now but not so long ago still widely in print; I remember paperback collections hyping Tros as a precursor of Conan the Barbarian, though they read nothing like that. In this issue Mundy continues the serial King of the World, starring one of his most popular series characters, the American agent of the British Secret Service, James "Jimgrim" Grim. During this period the nonfiction star of Adventure was "General Nogales," i.e. Rafael de Nogales, a Mexican soldier-of-fortune who recounted his globetrotting adventures in the magazine until its takeover by Popular Publications in 1934. Fred T. Everett contributed this typically distinctive cover. Look for Adventures on the Calendar most often on the 1st, 15th, 20th and 30th of each month, and look for my own personal copies down the line. As of now I own seven issues, five from the 1928-32 period, and two from the 1940s when Adventure was a monthly. That collection will grow soon.
Posted by Samuel Wilson at 12:00 AM