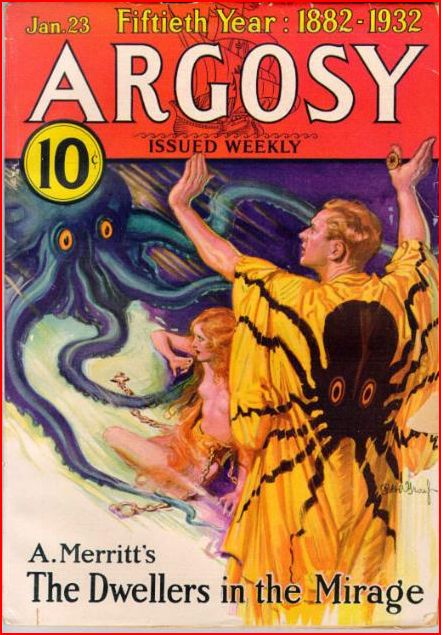 Argosy rarely limited itself to promoting only one story and one author on its covers, so the lack of verbiage on this 1932 cover should let you know that A. Merritt's Dwellers in the Mirage was an event. Merritt was a hugely popular but relatively unprolific author who had been identified with the Munsey company since his first stories began appearing in the publisher's All-Story Weekly in 1918. Dwellers was only his sixth serial to appear in Argosy since 1920. He'd pick up the pace by publishing another serial that fall. Another would come two years later, and that was it. Readers didn't like to wait for Merritt stories; he was one of the most requested authors among "Argonotes" letter writers. The rest of this issue's lineup isn't chopped liver. Erle Stanley Gardner contributes a novella featuring his western detective series character Whispering Story, while George F. Worts continues a serial featuring his Perry Mason precursor, defense attorney Gillian Hazeltine, and Fred MacIsaac wraps up The Golden Serpent. One of my favorites, Ralph R. Perry, has a short story, "The Dynamiter." If it's on the level of his Bellow Bill Williams stuff it'd be a treat. Robert A. Graef painted the risque cover, a reminder that pulps at their peak were contemporary with the Pre-Code period in movies and shared some of their transgressiveness. My own Argosy collection doesn't go quite this far back, but I'd say the venerable weekly was already in its peak period at this point.
Posted by Samuel Wilson at 12:00 AM