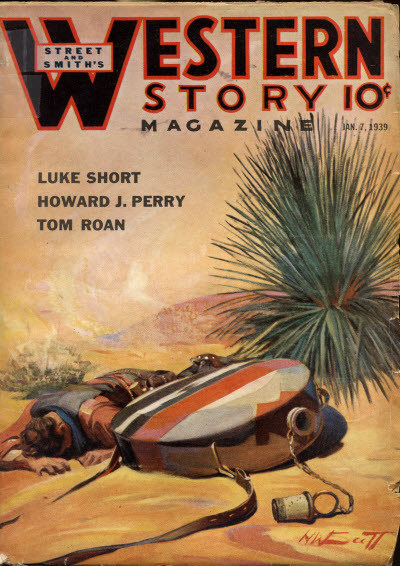 By pulp standards this 1939 cover for Street & Smith's weekly is stark minimalism. Their pulps had very strong cover design around the turn of the decade. As for the stories, the main selling point for me would be Luke Short. I can remember seeing his name all over bookstores or wherever paperbacks were sold when I was a kid. Like "Max Brand," the name was a pseudonym, the real man being Frederick D. Glidden. Glidden's brother became a pulp writer also, as "Pete Dawson." I haven't read much Short, but what I have, particularly the early novel Bounty Guns, I've liked.  Of the other billed authors, Howard J. Perry is unknown to me, while I've read some Tom Roan stories without them making any particular impression. Also inside with a novella is Crawford Sullivan, who I've read in Argosy, where he specialized in sea stories. As yet I don't own any Street & Smith pulps, but when I do a Western Story most likely will be the first in my collection. I actually prefer later western pulps -- my idea is that issues from the late Forties and Fifties come closer to the tone of that era's more mature western movies -- but the right combination of proven authors, including Short, may win me over eventually.
Posted by Samuel Wilson at 12:00 AM