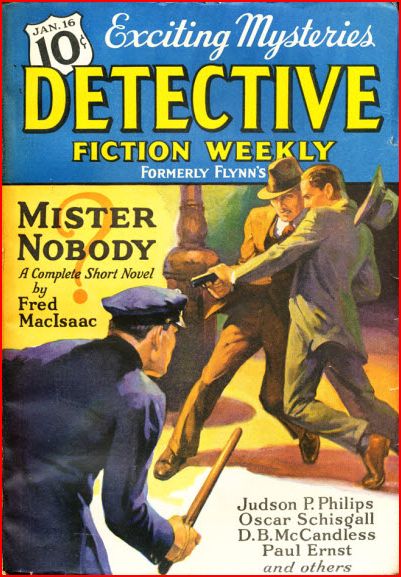 Here's a dramatic cover from 1937 fronting an issue of Detective Fiction Weekly with a decent array of talent. Lead author Fred MacIsaac was better known at this point for his "Rambler" series in Dime Detective. I've already described Judson Philips and D.B. McCandless, the latter of whom has another of his Sarah Watson stories in this issue. Paul Ernst tries to launch a new character, Bill Risk, this week, but Risk gets only one further outing according to the Fiction Mags Index. Also of interest inside is a non-fiction piece by "Convict 12627." Under this pseudonym Robert Arnold, later the author of a dictionary of underworld slang, had been writing stories of prison life since 1931, initially in Clayton Publications' Clues and later mostly for DFW. Respected detective writers Norman A. Daniels and Oscar Schisgall round out this week's offering. It isn't my ideal DFW lineup but for lots of people it'd do.
Posted by Samuel Wilson at 12:00 AM