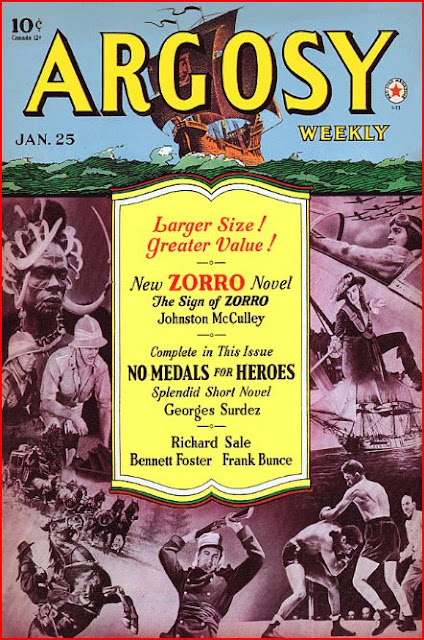 This is the second "bedsheet" issue of Argosy after the venerable weekly's latest format change in an increasingly desperate sequence. Blue Book would take a similar leap later in the summer of 1941, and Argosy probably showed the folks at the McCall company what not to do. As noted one week ago, the photo collage cover format is hideous. Inside doesn't look much better. Blue Book became, if anything, only more beautiful than it already was when it went bedsheet with its September issue; key to that was the monthly's pre-existing policy of lavish illustration from a whole stable of artists, with multiple illustrations for each story. Argosy gave you one picture on each story's title page -- except for a brief period around 1934-5 when you got spot illos of the main characters in some of the stories -- and that left the 1941 reader facing brutal walls of tiny three-column type on most pages. This issue exists in dowloadable form online and I read it on an e-reader with a 7" screen. It wasn't pretty. Worse, it looks they simply blew up illustrations intended for the magazine's smaller size, and not to the artist's advantage, while they didn't blow up Stookie Allen's one page "Men of Daring" cartoon feature at all -- perhaps he objected -- surrounding it with wide, bare margins.

Since the Fiction Mags Index doesn't list this issue's contents, here's my contribution to pulp scholarship. 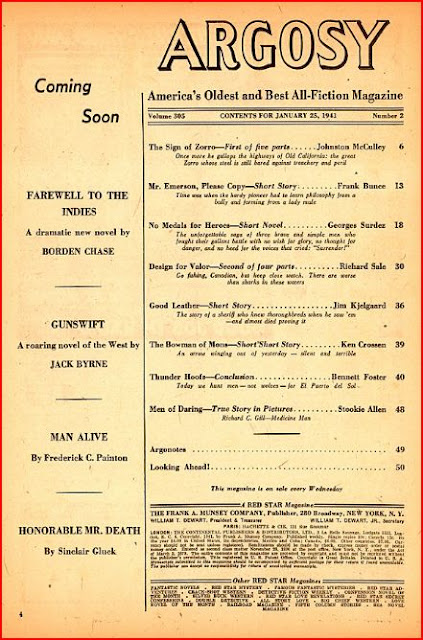 Argosy turned to one of its legendary characters to help put over the new format. Johnston McCulley's Zorro first appeared in Argosy's sibling pulp, the All-Story Weekly, in 1919. The prolific pulpster didn't do much with his creation until Douglas Fairbanks brought Zorro to cinematic life. He didn't really make an industry of Zorro until he most likely could sell little else late in his career. The vast majority of Zorro stories appeared on a nearly-monthly basis in the Thrilling group's West between 1944 and 1951. Earlier, after a 1922 serial McCulley didn't return to Zorro until 1931. Between then and 1941 there were two novellas, a short story and a serial. Throughout that period, however, McCulley published a lot of serials set in what Argosy called "Zorro-land:" Spanish-ruled California in roughly the same period as Don Diego Vega's career. These are often entertaining, probably because McCulley had the freedom to experiment with character, within certain generic parameters. 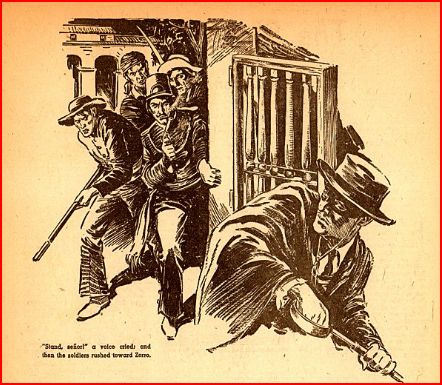 By comparison, the first chapter of The Sign of Zorro seems inert. That may be because it finds Don Diego in a funk. He hasn't worn the costume in some time, and has been mourning for his original beloved, whom we learn died of a fever. His father has to goad Diego into resuming his swashbuckling career when the Vegas learn what we discovered first-hand earlier, that a wealthy young woman is being menaced by a villain whose "reputation stinks like the wind blowing across a dead whale." Diego then does little more than interview the woman, with the first real action reserved for the next installment. McCulley is clearly more interested in other characters, particularly a retired pirate in whom the woman confides, and who in turn informs Diego's old servant Bernardo -- who has been cured of his muteness, we learn -- about her request for Zorro's help. In continuity, it's widely understood or believed that Don Diego is Zorro, but enough time has passed since the hero's last exploit that many have come to doubt the fact. Diego's disinterested benevolence in this opening installment doesn't give us much of a hook, and Diego himself seems bland compared to all the duelling dons McCulley had invented through the Thirties. There may have been fresh interest in Zorro due to the 1940 Tyrone Power Mark of Zorro remake, but Sign isn't as strong a lead as Argosy wanted or needed at this point.

Instead, and to no real surprise for pulp buffs, the best story in this issue is the "short novel" by Georges Surdez. The king of Foreign Legion stories, which means the master of hard-boiled colonial military adventures, Surdez owns a footnote in popular culture as the putative popularizer of the deadly game of Russian Roulette, which he described in a 1937 story for Collier's, one of the "slick" weeklies all pulpsters aspired to appear in. "No Medals for Heroes" deals with the regular French army in its darkest hour, during the German blitzkrieg of 1940. Surdez was Swiss by birth and wrote for pulps in English but obviously identified culturally with France. "No Medals" captures the rage and recrimination rife in defeat and the urge to blame it all on espionage, while giving Surdez's heroes a chance at payback as a handful of fliers wreaks havoc with a German bomber squadron. There's an ironic echo in Surdez's own impulse to blame "Fifth Column" elements for the Fall of France of Germany's own "stab in the back" myth of the end of World War I, and for once the irony is probably lost on the author, who nevertheless invests the adventure with his characteristic grim intensity.

The best of the rest is Jim Kjelgarrd's modern-western short story "Good Leather," in which an elderly lawman tries to pay an old debt to a dead friend by helping his outlaw son. Its happy ending is a kind of cop out but Kjelgaard strikes a sharp note portraying his hero's mortal despair as he thinks he's guessed wrong about the kid. I have nothing to say about Bennett Foster's serial Thunder Hoofs, which concludes this week, because Argosy almost never included recaps with the final chapters of their serials, leaving me no way to get into the story. Richard Sale's second chapter of Design for Valor does get a recap -- Argosy always invited browsers to "start now" with Part Two -- but this by-the-numbers wartime stuff had little to offer. "Mr. Emerson Please Copy" is an odd piece of Americana with obvious slick ambitions from Frank Bunce, purporting to tell the story behind Ralph Waldo Emerson's aphorism about consistency being the hobgoblin of small minds by inventing a name-dropping correspondent for the philosopher who goes west with plans for a utopian community but acquires more practical pioneer values. There's nothing really wrong with the story except that it hardly seems like the stuff of pulp, which was often the problem with Argosy at this time. Finally, the larger size allows Argosy to offer short-short stories complete on one page, just like Collier's, and this issue's short-short, Ken Crossen's "The Bowmen of Mons," reads like wartime propaganda before we got into the war. It's a heroic French resistance story with German occupiers under attack by the legendary title figure, whose real identity is supposed to surprise us. World War II hurt the pulps, I feel, because an all-encompassing Manichean struggle of that sort limits the options of pulp heroes who are more properly freebooters or freelancers. But the war was only one of Argosy's problems, and none of them were going to be solved with this makeover.

If anyone wants to judge this issue for himself or herself, here's a link to a digital scan you can download for use on your favorite reading device: