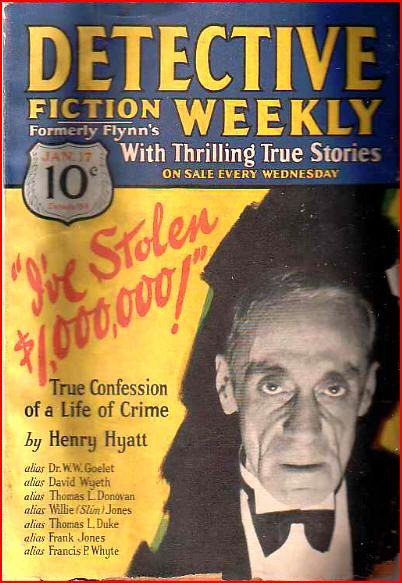 A perfunctory post this time since I have another longer post coming today. This is a 1931 Detective Fiction Weekly with a rare photo-cover with a "ripped from the headlines" type of framing effect. The nine-part memoir "I've Stolen $1,000,000!" is Henry Hyatt's only contribution to pulp literature, but he reputedly had a larger influence on pulp fiction. Hyatt claimed to be the inspiration for the archetypal safecracker Jimmy Valentine of O. Henry's famous story "A Retrieved Reformation." That story was adapted into a hugely popular, influential and oft-filmed play Alias Jimmy Valentine. Hyatt knew O. Henry when he and William Sidney Porter were fellow convicts, Porter supposedly pumping him for information that later went into the Valentine story. Interesting, DFW doesn't play up the Jimmy Valentine connection, on the cover at least, but when Hyatt's widow published the memoir as a book in 1949, after his death, she titled it Alias Jimmy Valentine Himself, By Himself. You can take a look at it at the Hathitrust Digital Library, a trove of old books scanned from college libraries and other sources.

Okay, that's already too much research for a perfunctory post, but I couldn't help myself. As for the actual detective fiction, this issue features three series characters: Erle Stanley Gardner's Sidney Zoom, J. Allen Dunn's Jimmy Dugan and Roland Philipps's Porky Neale. Fred MacIsaac has a serial running while Garnett Radcliffe and Harold DePolo contribute short stories. This issue presumably will appeal most to Gardner completists and those interested in the true-crime roots of popular fiction.
Posted by Samuel Wilson at 12:00 AM