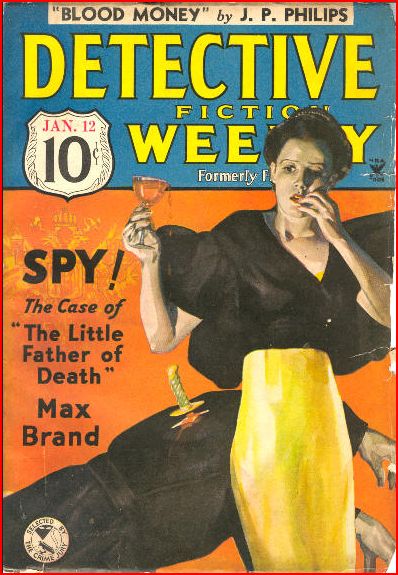 When I don't want to do an Argosy my choice comes down to the other three major weeklies except on certain days of the month -- the 10th, 15th, 20th and 25th -- when the biweeklies or (in the case of Adventure in the early 1920s) thrice-monthlies appeared. For the rest of the days I decide which weekly's cover I like best -- I realize I'm excluding at least one weekly romance pulp, but I don't expect much from those covers -- and whether I can find a properly reproducible image online. Today Detective Fiction Weekly gets the nod for this grimly charming 1935 cover. Max Brand's "Spy!" isn't a serial but a sequence of stories featuring one Anthony Hamilton that started in the previous week's issue. Brand wrote nine stories during the year before wrapping the series up with a serial that December. Billed above the title is Judson P. Philips, who may be better known to mystery fans of a later generation as Hugh Pentecost. Philips had a long-running series in DFW about the Park Avenue Hunt Club, but "Blood Money" features a small-time series character, Grant Simon, who appeared in only four stories between September 1934 and May 1935. Also in this issue is Murray Leinster, best known today as a sci-fi writer, whose "Village of Plenty Fella Hell" definitely sports this week's most interesting title. The one actual serial going on at this time is Fred MacIsaac's "The Man With the Club Foot," which started last week. That "Selected By The Crime Jury" logo started the previous December. DFW gave it up the following summer. I have no idea whether the logo meant that some independent entity had endorsed the magazine or that a Crime Jury selected the contents of each issue. If we're lucky some DFW specialist may deign to enlighten us.
Posted by Samuel Wilson at 3:00 AM