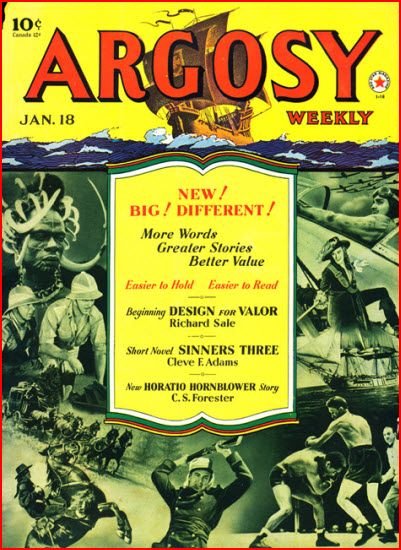 Here's the big change promised for Argosy in the venerable weekly's January 4 issue. If anything, the photo collage of actualities and movie images -- you can see Gary Cooper as Beau Geste at the bottom of the page, a mounted Zorro to his left, and Errol Flynn from either Captain Blood or The Sea Hawk at approximately 2 o'clock -- has made the standard cover format uglier than before. Argosy has become a "bedsheet," closer to the size of a standard magazine. It has reduced the page count again from 112 to 50 pages, but with three-column pages of smaller type than ever, it can claim to have more words than before. To give an idea of how well all this was received, less than two months later Argosy added 16 more pages to remedy readers' eye strain. Another drastic change in cover format would come in April. Every tweak since 1940 should have been an alarm bell; the once-mighty pulp was in big trouble.

I know no more about this issue than what's shown on the cover; the Fiction Mags Index has never seen the inside table of contents. All I can add is that a Bennett Foster western serial, Thunder Hoofs, continues this week while Louis C. Goldsmith's Fools Fly High concludes. Argosy plays one of its trumps this week; the weekly had introduced American audiences to C.S. Forester's Horatio Hornblower, in stories reprinted from British editions, back in 1938, and took credit for popularizing the British naval hero from the Age of Napoleon. Richard Sale was a familiar name for Argosy regulars, while Cleve L. Adams was a hard-boiled writer who was appearing regularly in Black Mask, Dime Detective and Detective Fiction Weekly at this time. The January 25 issue exists online in scanned form so I'll be taking a closer look at the transformed Argosy a week from now.
Posted by Samuel Wilson at 12:00 AM