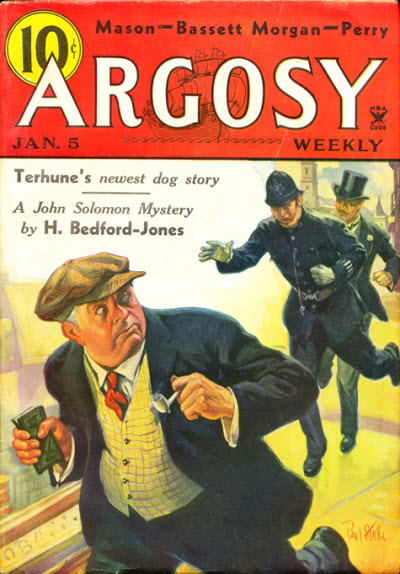 Here is Argosy at the start of one of its peak years. Nearly half of 1935 (23 issues) is available at unz.org, the second largest number of issues for one year after the 30 for 1940. I have nine additional '35 issues in my own collection. What I like about 1935 Argosy isn't necessarily what the magazine itself emphasized, though as we get deeper into the year you'll see some agreement between it and me on at least one cover-hogging character. For January 5 the character on the Paul Stahr cover is the cockney detective and adventurer John Solomon, one of the most popular series characters of champion pulp writer H. Bedford-Jones. Reputedly the most prolific of all pulpsters, Bedford-Jones didn't dominate Argosy the way he dominated Blue Book (under his own name and several aliases), but he was a dependable attraction for the venerable weekly. Bedford-Jones and Solomon share star billing this week with once-beloved author Albert Payson Terhune, whose specialty is spelled out pretty plainly on the cover. For me the main attraction of this issue is the author whose last name is the last of the three listed above the logo. Ralph R. Perry is one of my favorite pulp writers and his main Argosy creation Bellow Bill Williams is one of my favorite pulp characters. "Forty Dead Men" isn't a Bellow Bill story -- you'll see some of those later -- but it has the violent intensity I like in Perry. It's about an American engineer caught between two Peruvian families feuding over the legendary Mine of the Forty Dead Men, so named because those who failed to find gold at their master's command were left there to die. Perry's stories often are the pulpiest things in an Argosy issue, though this issue's conclusion of Theodore Roscoe's seminal voodoo-zombie serial A Grave Must Be Deep most likely tops it. As far as stand-alone stories go, Perry's gets 1935 off to an entertaining start for Argosy. You can read the story yourself by following the link below to the unz.org website.