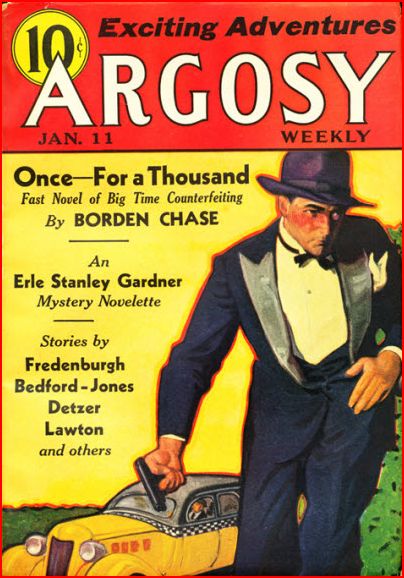 The cover of this 1936 issue doesn't identify the guy with the gun, but the taxi cab in the background leads me to guess that the gentleman's name is Smooth Kyle. Borden Chase, later to pen such classic western screenplays as Red River, Winchester '73, Vera Cruz and The Far Country, introduced Smooth, a cabbie turned government agent, in the 1935 serial Midnight Taxi, one year after he'd broken into Argosy with stories based on his experience as a sandhog or tunnel digger. I haven't read Midnight Taxi or this one, but I've read three later Kyle serials: 1937's Blue, White and Perfect and 1940's The Sun Sets at Five and Crooked Caribbean Cross. They're all quite entertaining, thanks especially to the banter between Smooth and his girlfriend Gilda, a hard-boiled dame with mob connections and a ruthless streak. I could believe that these stories got the attention of Howard Hawks, who hired Chase for Red River. The big name on the cover, or the one more people may recognize, is Erle Stanley Gardner. The creator of Perry Mason, who never appeared in a pulp, was a veteran pulpster who contributed lesser characters like Whispering Story and Major Brane to Argosy. The Fiction Mags index doesn't identify this week's story, "Slated to Die," with any continuing character, but that admirable reference remains far from comprehensive. H. Bedford-Jones continues a serial commemorating the centennial of Texas independence, Karl Detzer continues one of his firefighting serials, and Frederick "Max Brand" Faust continues one under his Dennis Lawton alias. Frederick C. Painton, an author I like, contributes a short story, but "Punch Drunk" suggests a boxing story, which is something outside his air war (or "war-air," as they said back then) and espionage specialties, so I don't know how good it might be. I've only just started to acquire Argosy issues from 1936, and unz.org has only one issue from that year, but it looks like anyone who collects the entire Chase serial will get a lot of good stuff along with it.
Posted by Samuel Wilson at 5:00 AM