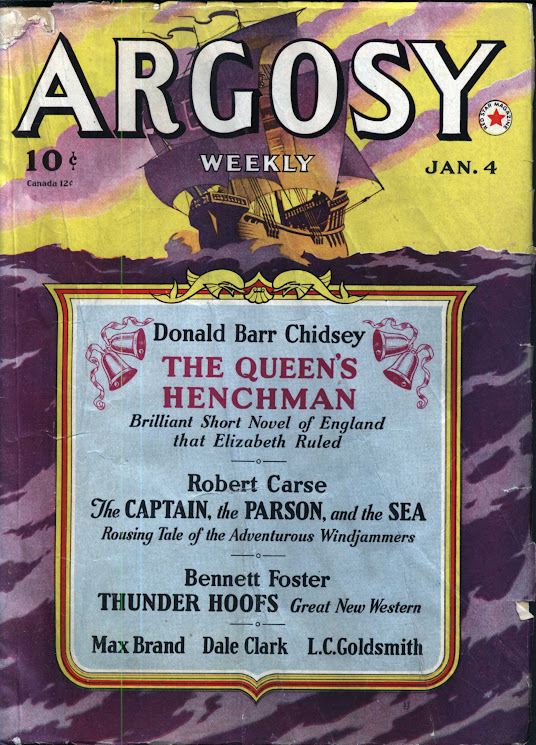 Back on January 1 we took a look at an Argosy from that date in 1938. What a difference three years make! Later in 1938 the weekly cut its page count for the first time in many years, going down from 144 to 128. In the spring of 1940 came another cut, reducing the weekly page count to 112. Argosy remained the same on the outside until that summer, when it adopted the standard cover format you see here, eliminating the individual cover paintings that are pulp magazines' most appealing feature for many collectors. One suspects that this was a cost-cutting measure, since artists no longer had to be paid. But it may also have been another effort to mainstream Argosy. Read "Argonotes" letter columns from after the switch and you'll find some readers applauding the change. Those now-beloved, often lurid covers were considered by some, if not many, as pulps' most embarrassing feature. This more classy, if less exciting, cover design made it easier for some readers to carry an issue away from the newsstand or read the thing in public. The Munsey company must not have been satisfied with the results, since further changes were coming, as announced in this ad on the inside front cover. 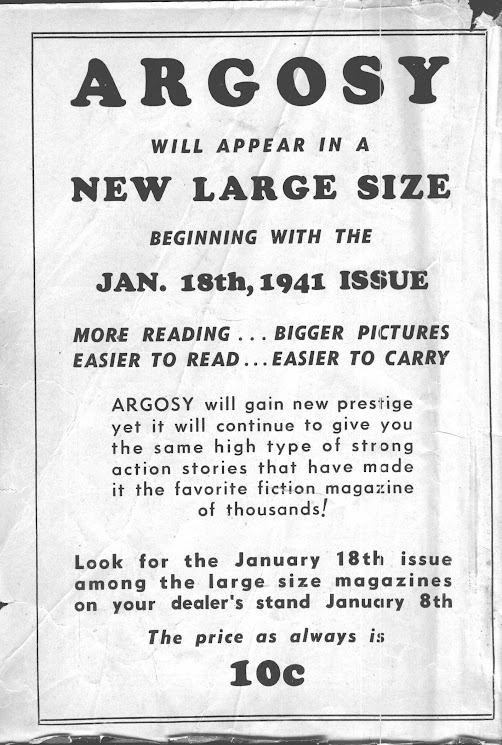 At the same time that Munsey was trying to flood the pulp market with new titles in an attempt to claim market share for its "Red Star Line," the company seemed to believe that the pulp format itself was no longer viable for its flagship publication. Argosy wasn't the first pulp to experiment this way. Another of the Big Four general-interest pulps, Blue Book, had gone large (the technical term is "bedsheet") for a little while in the early 1930s, and would do so again, to tremendous aesthetic effect, later in 1941. By comparison, you can't help catching a whiff of desperation in Argosy's forthcoming transformation, which would prove the first of many changes in 1941, none of which inspired much confidence in the once-mighty magazine's long-term future.

Inside, the main event is a "short novel" by the prolific Donald Barr Chidsey. The Elizabethan setting would seem like a natural to Chidsey -- who had published a hard-boiled biography from the period, Sir Humphrey Gilbert, Elizabeth's Racketeer, in 1932. But if anything Chidsey is too eager to show off his knowledge, including impenetrable street argot, in a "novel" that proves a little too short. To me, at least, the climax came a little abruptly after an elaborate buildup, and there's too much attention paid to the hero's junior pickpocket helper to my taste, too.

Instead, the best story of this issue is a short one by one of my favorites, Robert Carse. He specialized in stories of tough men in desperate circumstances. He's one of the top Foreign Legion writers but has impressed me in settings as diverse as Devil's Island and Depression U.S.A. "The Captain, The Parson and the Sea" pits a hardcase captain against a humane parson on a pre-Panama Canal voyage around Cape Horn to Gold-Rush California with a mutinous crew. The Parson initially sees the Captain as a brutal tyrant but discovers his virtues, and the necessity of some of his policies, along the way, while the Captain comes to respect the Parson as a man and a worker. Thankfully, Carse here resists the temptation, as he doesn't always do at this point in his career, to throw in a romantic subplot, though one is teased throughout by including a gambler's daughter among the passengers.

Otherwise, this issue finds us in the middle of one of Max Brand's popular Dr. Kildare serials, as well as a western serial by the dependable Bennett Foster and a flying serial, set in the barnstorming 1920s, by authentic pilot Louis C. Goldsmith, at this point a rising star among pulp writers, whose career was cut short by World War II and who died in a transport plane crash in Scotland in 1943. There's also a story in Dale Clark's comedy series about sleazy Hollywood agent J. Edwin Bell, which I rarely find funny and never find proper content for a pulp magazine. The Carse story is the highlight so here it is for you to download and read: