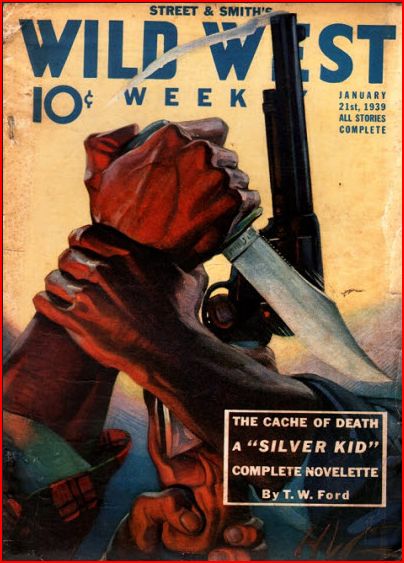 There's a stark quality, almost abstract by pulp standards, to this 1939 Wild West Weekly cover by Harold Winfield Scott. This sort of close-up, with no faces visible, seems atypical of pulp cover art. As I've said already, there's a high standard of design to Street & Smith covers from this period, but I do wonder how well this one sold the issue to its target audience. Along with series hero the Silver Kid, who gets the cover story, this week's issue features one continuing character, Pete Rice, who used to have his very own magazine back when Street & Smith thought they could do hero pulps in all different genres. It also includes the last appearance of a short-lived series character, Guy L. Maynard's Far-Away Logan, who starred in six stories in as many weeks between December 17, 1938 and this issue. Maynard had greater success in Wild West Weekly with his Senor Red Mask. In addition to these prose personalities, there's a continuing comic strip character, Warren Elliot Carleton's Dusty Radburn, in the middle of a run that lasted from November 1938 to March 1939. Most of the authors in this issue are unfamiliar to me, so I can't really say more other than to admire that cover again.
Posted by Samuel Wilson at 12:00 AM