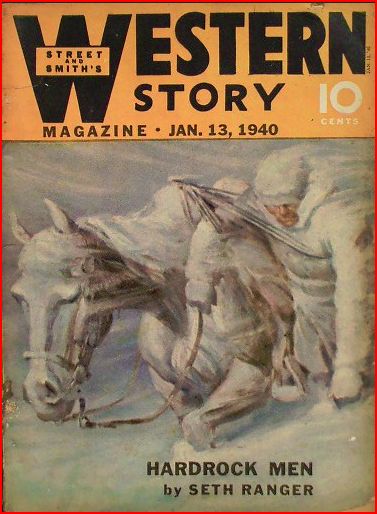 In the wintry spirit of The Hateful Eight and The Revenant, here's a snowy cover scene from 1940. Edward Stevenson came up with this white-on-white composition, which may or may not illustrate the cover story. Seth Ranger is only in this issue because Frank Richardson Pierce is. That's because Ranger was Pierce, who I know and like best as the author of the No-Shirt McGee stories in Argosy and Short Stories. An editor might accept two stories from one author for an issue, but it somehow never looked good to let one author have multiple bylines. That's why torrential authors like Frederick Faust and H. Bedford-Jones had so many pseudonyms, and it's why Pierce had Seth Ranger. For whatever reason, Ranger is credited with the five-part serial starting this issue, while Pierce uses his own name for a short story. You'd think you'd use your real name for the big stuff, but maybe Ranger had become the more bankable name, or maybe Pierce felt the short story was the better work. That's presuming he had a say in which name got either byline. Also inside are the then-ubiquitous Walt Coburn and up-and-comer Wayne D. Overholser, who still had a long career ahead of him. If Ranger's westerns are as entertaining as Pierce's sourdough stories, this issue and the whole serial are probably worth getting.
Posted by Samuel Wilson at 12:00 AM