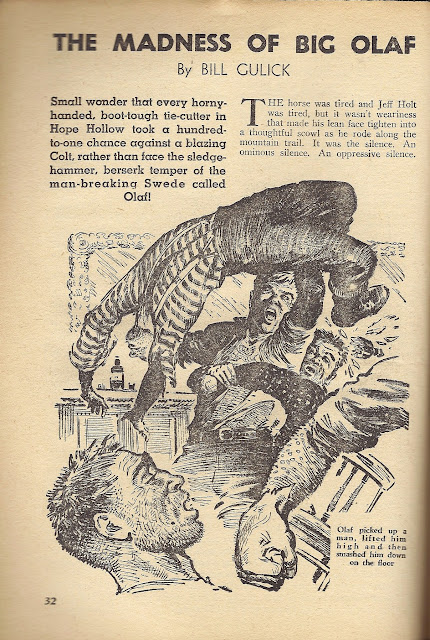 Here's another scan from my copy of the May 1948 Dime Western. Bill Gulick was one of the last surviving western pulp writers -- I suspect the precocious John Jakes will be the last if he isn't already -- living 97 years to 2013. Several of his novels were made into movies, most notably Bend of the Snake, which became Anthony Mann's Bend of the River. May 1948 sees Gulick at the brink of a hiatus; he would not publish another pulp story for more than a year; he may have been working on Bend of the Snake at the time. "The Madness of Big Olaf" would be a textbook example of pulp's political incorrectness if anyone really cared how Swedes were portrayed in popular fiction. Gulick's title character is as much a stereotype as any ethnic character you might encounter. "You know Swedes," a character says, "And you know how they get after a winter in the woods. Like wildmen." The titular Swede's madness if only one of the protagonist's problems. The other is that he has to lay a certain amount of railroad track by a certain time to fulfill a contract -- a typical pulp situation -- but a business rival is running a saloon nearby to keep the hero's work crew, including numerous Swedish wild men, good and drunk. Big Olaf is mad at our hero because the hero knocked him out with a lucky punch in their first encounter. The hero figures out a way to solve both problems at once. I'm not really bothered by the stereotyping, but then again I'm no Swede. The story is neat and concise and as the first piece from Gulick that I've read it made a good impression. Click on the link below to read and judge for yourselves.

P.S.This story is sponsored, as you'll see, by the Mutual Radio Network. I find it interesting that the list of mystery programs in their ad doesn't feature their best-known show, The Shadow. Could that have something to do with him being a creature of a rival pulp publisher? He knows, probably.
Posted by Samuel Wilson at 8:00 AM