From My Collection: DIME WESTERN, MAY 1948 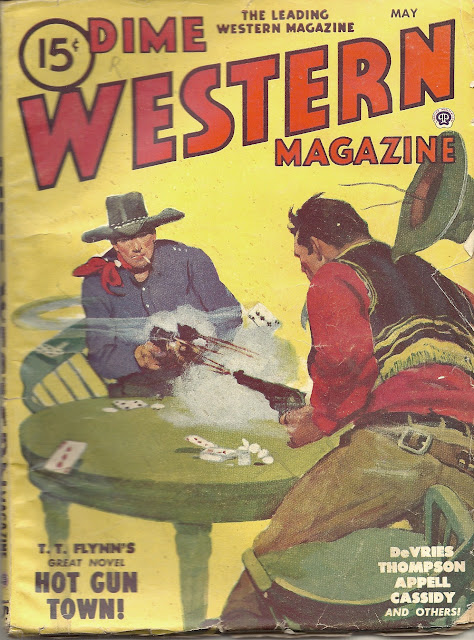 My pulp collection consists of two types of magazines: general-interest adventure pulps like Argosy and Adventure, and westerns. You won't see my westerns on the Pulp Calendar because they're all monthlies. I don't own any of Street & Smith's weeklies or early biweekly issues of Dime Western. If I had any copies of Ranch Romances, the longest-surviving biweekly pulp, they'd be no good for the Calendar because they were dated as "First January Number" and so on. So my own westerns will appear on the blog as special attractions, including the added attraction of scanned stories and, depending on my ambitions, complete scanned issues down the line.

My pulp western collection ranges chronologically from 1948 -- this issue of Dime is my earliest -- to 1953, near the end of the pulp era. My thinking has been that pulp westerns should get better as time marches on, and that pulps from this particular period should share some of the virtues of the more mature movie westerns that were appearing in the same time period. Perhaps inevitably, the majority of my westerns are from Popular Publications. I have a few from the Thrilling Group, a couple from Stadium (some of the same people who gave us Marvel Comics) and so far only one title from Fiction House, and I probably should include two digest issues of Zane Grey's Western Magazine from Dell as well. Popular appears to have had the best westerns in this period, with less kiddie-like fare than Thrilling's more hero-oriented pulps. Many of the best authors appeared in pulps from all publishers, excepting probably bargain-basement Columbia, which ended up the only game in town at the bitter end of the era at the end of the Fifties.

Dime Western was the flagship of Popular's western line, though by 1948 the price belied the title. At this time Dime was smaller than Popular's other western monthlies at 98 pages, but the typeface was also smaller than the others', at least as far as I can tell from my contemporary copies of Star Western and scans of other Populars. You could feel like you were getting your money's worth despite the smaller page-count, and even at 15 cents Dime was still a dime cheaper than the other monthlies. This issue, at least, had some respectable advertising on the back cover. I like the audience targeting here; pulp readers are presumed to want to be writers someday. 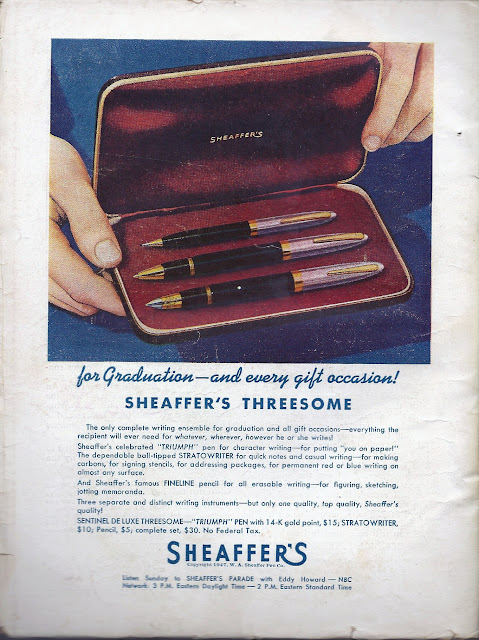 The May 1948 issue has a respectable lineup. T. T. Flynn, author of the lead "novel" -- all 23 pages of it -- is the author of The Man From Laramie, from which the classic Anthony Mann-Jimmy Stewart film was made. Thomas Thompson is another major writer from this period, one who moved into TV writing post-pulp, mainly for Bonanza, for which he served for a time as a consultant. Marvin de Vries, Bill Gulick and Tom W. Blackburn were all dependable writers, while Bart Cassidy had been doing the comedy series about Tensleep Maxon since 1933. It was such a popular feature that issues used to have "A Tensleep Story" printed on their spines. I don't care for western comedy much, but to each his own. You'll see more of these people later, some of them in the week to come as I scan more stories. For now, your first taste of this issue will be George C. Appell's short story "Parson of Damnation." It's a harsh little tale of a man of God who proves to be not so much a man of peace as one might assume. I've liked just about everything I've read from Appell so far and I hope "Parson" at least amuses you. You can download it using the line below. Over the next week I plan to upload some more stories from this issue so be sure to come back for more.