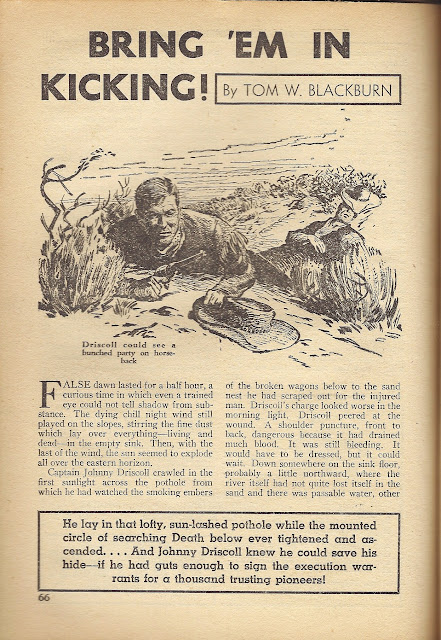 Here's another story scanned from the pages of Popular Publications' May 1948 issue of Dime Western. Tom W. Blackburn was a busy pulpster of the period. In May 1948 he placed stories in seven different pulps, all but one for Popular. Four of those were novellas or novelettes, but "Bring 'Em In Kicking!" is a seven-page short story, refreshingly free of melodrama, by-the-numbers romance angles or the "yuhs" and "tuhs." It's basically a survival story as the hero has to bring an injured, uncooperative survivor of a raid back to the fort. Blackburn started out as a ghostwriter for some of the reputedly more prolific authors before publishing under his own name. By 1950 he had broken into the slicks, but his biggest success was to come in Hollywood, and not in prose. By far, Blackburn's most famous piece of writing is "The Ballad of Davy Crockett," the theme song for the epochal Disney TV series that he also scripted. Our story is just a little bit more edgy than that and is typical solid pulp writing from Blackburn. Click on the link below to download it and judge for yourself.