VINTAGE PAPERBACK OF THE WEEK: Richard Telfair, THE BLOODY MEDALLION (1959) 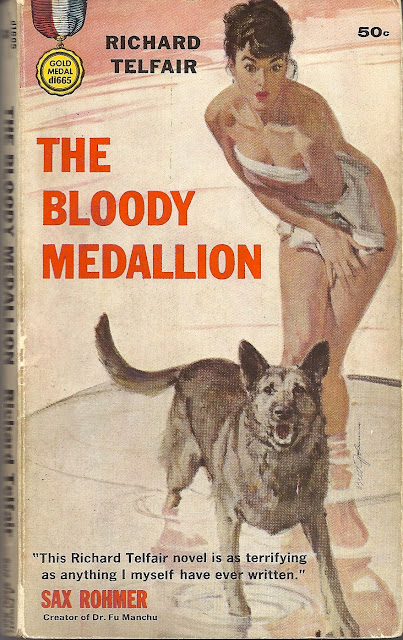 The blurb from Sax Rohmer, who died the year The Bloody Medallion was published, doesn't seem to match the cheesecake scene on the cover, although the painting does illustrate a scene in the novel. Rohmer was being generous -- and how "terrifying" did people find his stuff even back in 1959? -- but Medallion, which began a series of five novels featuring American spy Montgomery Nash, is a grim little story. My copy is a 1966 reprint -- towards the back it advertises a novelization by Robert W. Krepps of that year's remake of Stagecoach, as well as the latest novel in Edward S. Aarons' more enduring spy series about Sam Durrell  -- so even though the Nash series was over by 1962 the spy craze inspired by the James Bond movies presumably kept these novels in print. Telfair was a pen name for Richard Jessup, who created the alias for his Wyoming Jones series of westerns for Fawcett Gold Medal. Under his own name, Jessup may be best known as the author of The Cincinnati Kid, the source novel for the 1965 Steve McQueen film.

The Bloody Medallion is standard spy material with an extra ratchet or two of paranoia. It threatens to bog itself down in jargon early as Monty Nash, narrating his own story, describes his work for the Department of Counter Intelligence. He and Paul Austin are a two-man "first squad" that conducts "pursuits" of enemy agents abroad. His problem is that Austin disappears, and is reported dead, after giving Nash an urgent message. Austin was having an affair with a woman he met during a pursuit in Belgium, and Nash's superiors suspect that she flipped Austin. That puts Nash himself under suspicion. In time-hallowed fashion Monty has to fight his way out of headquarters so he can prove his innocence, if not his buddy's as well. The most interesting touch in the opening chapters is Nash's subjection to "narcosynthesis" by his superiors, who talk to him like he was a child ("Isn't Paul wicked to become a defector and traitor?") while trying to loosen his lips. After that Medallion becomes pretty old-fashioned stuff.

Nash makes his way to Belgium to interrogate Helga, the woman Paul was sleeping with. He discovers, after killing her husband and maid, that she's a member of the oft-rumored "medallion society," a sort of freelance communist international. "Even the Secret Police do not know who we are," she tells Monty. It all started with a band of teenage soldiers at the Battle of Stalingrad who swore to avenge the slaughter of their comrades by the Nazis. Nothing wrong with that, but postwar they resolved to fight fascists everywhere on earth, on the understanding that fascists are "all that stood in the way of socialist progress." In practice, anyone who stood in the way of socialist progress was a fascist. That put the medallion society on the path of enmity toward "the only real friends the Russian people ever had," i.e. the U.S. and its allies. Helga kills herself before Nash makes her give away names and places, but with the few clues available he tries to crack the society, taking another victim's medallion and exploiting the society's isolated cell structure to pass himself off as a member on his own mission. Against the odds, he is accepted by a unit that orders him to rob a Madrid bank. While dodging DCI squads pursuing him, Monty falls in love with Maria, a young Spanish woman with two vicious dogs -- that's her on the cover -- who's fallen into the society's orbit. His goal is to identify a real leader of the society and eventually take the whole shebang apart, but his prove to be Pyrrhic victories at best.... 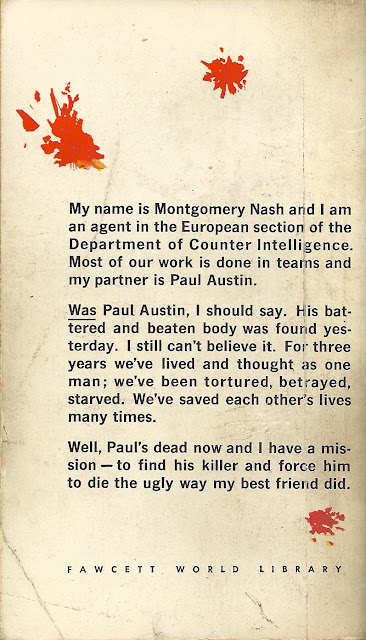 Monty Nash is a committed Cold Warrior, convinced that he's fighting, as a DCI man, for his own freedom."I think of myself as much too cynical to admit to any such simple dedication as fighting in my own way for the specific right to be a free man," he says, "Yet, in any honest self-examination, it must come down to that. There is no substitute for freedom." Yet Medallion is more pro-freedom than anti-communist, insofar as it doesn't demonize Nash's antagonists. Monty can recognize honor in some of his foes. "I can argue with what you fought for," he tells one such foe, who turns into an ally at the end of the story, but "I can't argue with a man who has fought well -- and lost." He later describes the same man as "the tired old revolutionary who had fought wisely, well, with courage and convictions." The point really is to contrast this revolutionary with the novel's real villain, who proves to be in it, and behind it all, purely for the money. Medallion gains a certain gravitas as it turns tragic at the end but the infiltration, romance and caper plotlines are all pretty commonplace. Despite all the talk about freedom and communism, the same story probably could have been told in Sax Rohmer's heyday. It's good enough to be a page-turner, and for the $1.50 I paid for it I suppose that's all right.
Posted by Samuel Wilson at 3:49 PM