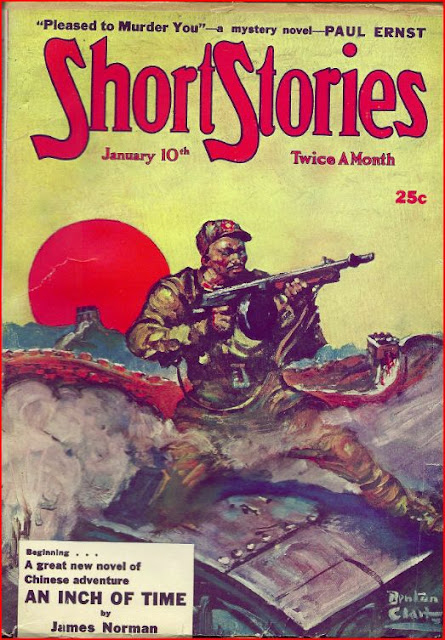 This 1944 issue is the only issue of Short Stories in my pulp collection to date. There's no special reason for the relative neglect. I was impressed by the few issues available in the unz.org trove and I've read some others that have been scanned and made available online. Short Stories was one of the most successful general-interest pulps. It maintained a more-than-monthly schedule longer than any other pulp with the phenomenal exception of Ranch Romances, finally becoming a monthly in the spring of 1949. Through the 1930s and until World War II it had 176 pages per issue, except for a brief period in 1932 when it escalated to 224. When the war came it shrunk slightly to 160 pages. My issue is the one of the last at that size; the magazine retrenched to 144 pages with the February 10 issue. 144 pages twice a month was still a lot of pulp in those days. Its rivals -- Adventure, Argosy and Blue Book -- all were monthly at this time, and the latter two had gone bedsheet. Adventure ran as high as 160 pages for a little while during the war but shrunk back to 144, and that was once a month. The same company that put Short Stories out was also publishing Weird Tales at this time. I don't know if they were doing anything else, but those two were plenty.

Let's take a little look around this issue. Here's the back cover. 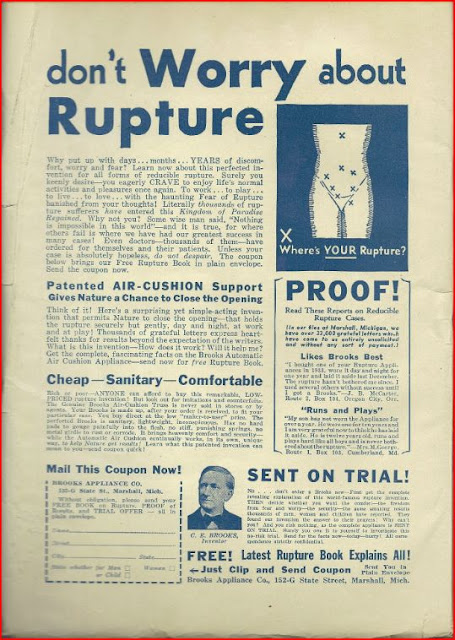 Readers often complained about how the front covers embarrassed them, but some of these back-cover ads might have been more embarrassing. I'm going to do a post shortly about advertising in the pulps that will show a decline over time in the quality of back-cover advertising that's either effect or cause of the decline of pulp magazines as a fiction-delivery medium. You used to get better than this on the back, but it still wasn't always this bad, and there were pretty skunky advertisers even in the more golden days of a decade earlier. But now let's inspect this issue's sturdy spine.

I don't know when Short Stories started boasting of being "A Man's Magazine," but I do know that a couple of years earlier Blue Book started emphasizing "Stories of Adventure For Men, By Men." This insistence, implicitly exclusive by gender and age, points toward the evolution of pulp fiction into "men's adventure" as the original pulp audience splits demographically, the kids presumably adopting comic books while the women who always read pulps -- they wrote to Argosy all the time -- faced a sort of No Girls Allowed sign. At this point, though, Short Stories doesn't have the more sleazy or salacious content that defined "men's adventure." It's standard pulp stuff, with an inevitable wartime spin.

I haven't read through this issue yet but I'll tell you about it. The cover story (the cover itself is by Benton Clark) is the first installment of a four-part serial. Paul Ernst, the author of the "mystery novel," wrote plenty of "fantastics" and hero stories, being the author of the Avenger series for Street & Smith and the Doctor Satan series for Weird Tales. Short Stories always had a lot of westerns, and this issue has a short story by old-timer George Bruce Marquis and a novella by John Dudley Phelps, an unknown quantity to me. Better known authors this issue include William Heuman, who contributes a football story, and the omnipresent H. Bedford-Jones, who was in the middle of a near-future sci-fi series, "Tales of the Strato-Shooters." The shortest story this issue is William Lynch's "Arctic Passage." Lynch was an Australian who made it into all the contemporary "Big Four" in a burst of activity between 1943 and 1947. "Arctic Passage" is a tense little tale about a ship that falls behind the rest of its convoy as U-boats lurk nearby. But you don't need me to describe it because you can read it below! 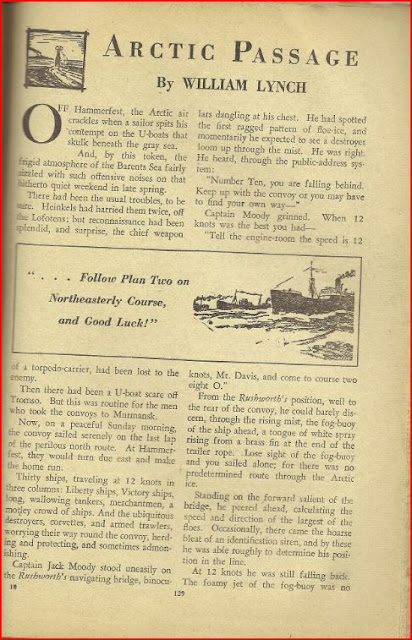 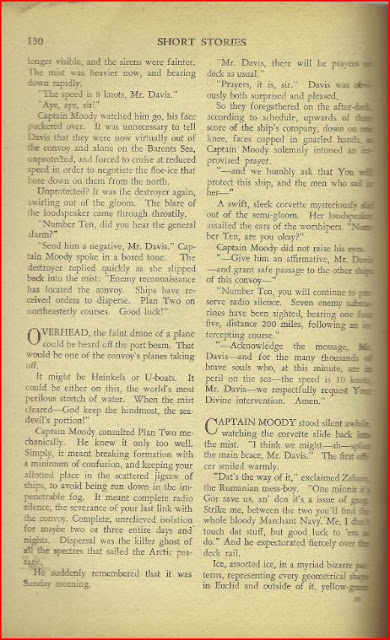 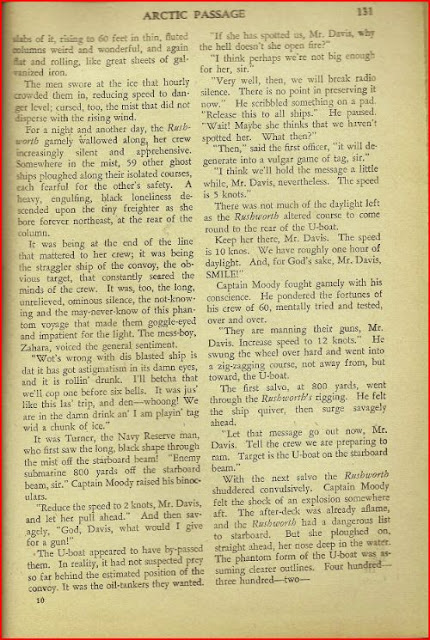 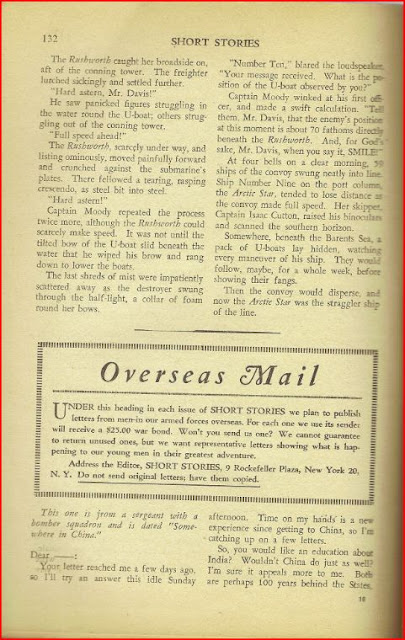 This is my first very modest experiment in scanning pulp content from my collection. I don't have a super-deluxe scanner or special software for processing the scans, but I feel I owe it to all the other people who are sharing vintage pulps with the online world to start to do my share. I'll do more experiments in this line before trying my luck with scanning a complete issue, so keep an eye on the Calendar for bonus content in the future.
Posted by Samuel Wilson at 12:00 AM