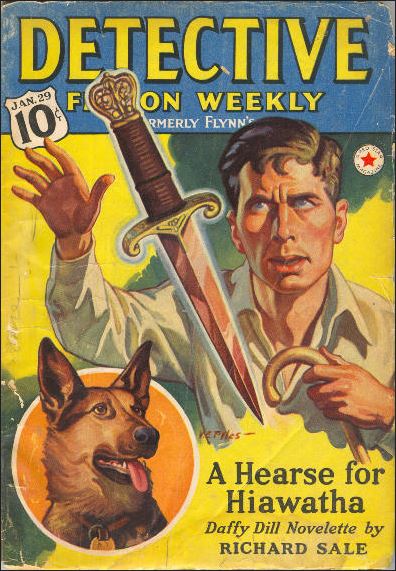 Daffy Dill was Richard Sale's most popular series character. Dill, a reporter, first appeared in Detective Fiction Weekly in the fall of 1934. This issue is from 1938 and features the 27th Dill story by the reckoning of the Fiction Mags Index. Sale would more than double that number before the series ended in 1943. I regret to say I haven't read any Dill stories, though I have one reprinted (in facsimile form) in the Hard-Boiled Dames anthology, since Dill had a resourceful sidekick in Dinah Mason. There's something nearly surreal in cover artist Vernon E. Pyles's juxtaposition of blind man, dog, dagger and the Hiawatha reference; what has all this to do with that? This is nearly an archetypal issue of DFW when you throw in the latest chapter of Judson Philips's Park Avenue Hunt Club serial. A less enduring series hero, Edgar Franklin's Johnny Dolan, also puts in a late appearance. Franklin wrote 19 Dolan stories in little more than two years, and "Them Cards Don't Lie" is the first of four from 1938 that wrapped up the series. William E. Barrett and Weston Hill contribute novelets, while Wyatt Blassingame, Samuel Taylor and Lawrence Treat deliver short stories. Evan Lewis's Davy Crockett's Almanack blog has scanned a number of Daffy Dill stories, though not this day's tale. You can check them out here.
Posted by Samuel Wilson at 3:00 AM