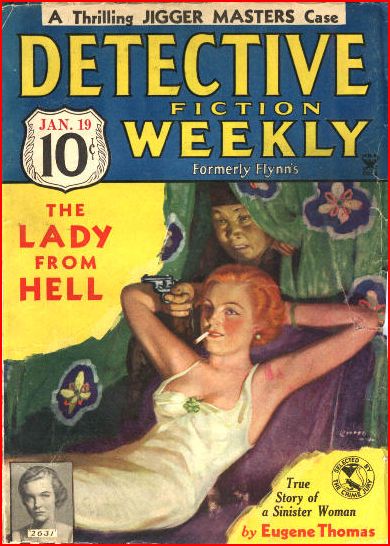 This 1935 issue of Detective Fiction Weekly begins the life work, at least in the pulp field, of Eugene Thomas. Of 26 stories reported in the Fiction Mags Index, all but one concern the cigarette-smoking sinister woman on the cover. All but one of those were written in a roughly two-year period, the series extending to the fall of 1936 before Thomas retired Vivian Legrand, only to revive her once in 1938. Legrand would seem to have led a hellacious life to provide Thomas with so much copy -- except that, like many a "true" story told in men's magazines for decades to come, this one was largely if not entirely made up. "The Lady From Hell" was a female supercriminal who, if she doesn't always win, always survives to fight another day. DFW didn't play by the "crime does not play" rules that comic books would adopt a short time later. The Lady shares space this issue with three recurring series characters: Anthony Rud's Jigger Masters, a debunking detective who dealt with pseudo-supernatural menaces; H. H. Matteson's Hoh-Hoh Stevens; and Edward Parrish Ware's Ranger Jack Calhoun. You also get your weekly cipher puzzle, a ju-jitsu instruction column by John Yamado, several more stories and another chapter of Fred MacIsaac's Man with the Club Foot. The Lady's debut and her GG cover art (by Lejaren Hiller) may make this a pricey issue, but probably not extremely so. That cover definitely does its job: I wouldn't mind learning the story behind it.
Posted by Samuel Wilson at 12:00 AM