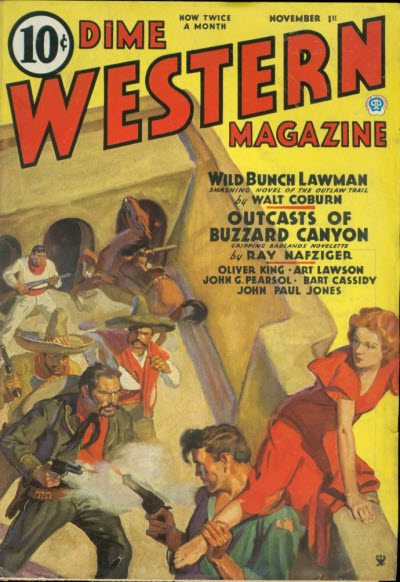 For Dime Western in 1935, Walter Baumhofer illustrates one of the pitfalls of building a wall between the U.S. and Mexico: it could make it more difficult for Americans to get back where they belong. Dime was near the end of its early prosperity by this point; it would revert from twice-a-month to monthly in December. It would remain one of the best western pulps for almost two decades more. This issue gives you a fairly typical Dime Western lineup, led by the almost omnipresent Walt Coburn. "Bart Cassidy" and "Oliver King" are pseudonyms, the latter covering for Thomas E. Mount, the former for whoever could be roped into writing a Tensleep Maxon story, Edgar L. Cooper or Harry F. Olmstead. Tensleep, Dime's comedy relief, showed up even more often than Coburn did, and even received billing on the spine of the magazine. Never a fan of comic westerns, I can only shrug and let others have their entertainment.
Posted by Samuel Wilson at 12:29 PM