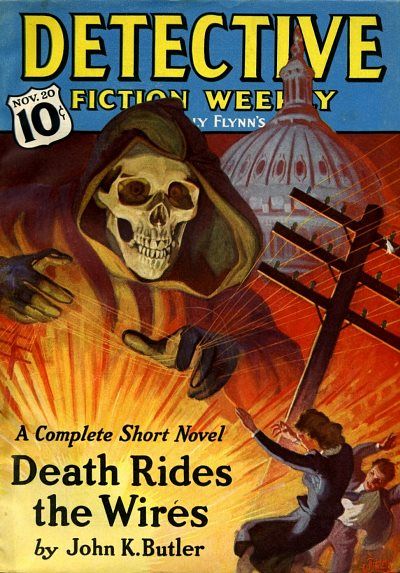 Rudolph Belarski cuts loose with a wild, comic-book like cover with a Washington D.C. backdrop for this 1937 Detective Fiction Weekly introducing John K. Butler's novelette "Death Rides the Wires." Death is pretty busy this issue, not only riding the wires but, as Denslow M. Dade reports, stalking at night. Also along for the ride are Bulldog Drummond, in one of his creator "Sapper's" last stories, Steve Fisher's Tony Key and Edgar Franklin's Johnny Dolan, while Robert E. Larkin and Roger Torry contribute standalone stories and Donald "Fred MacIsaac" Ross continues his serial Hot Gold. Death had skipped the last issue and would take the next three off before getting back to work in the December 18 issue.
Posted by Samuel Wilson at 3:32 PM