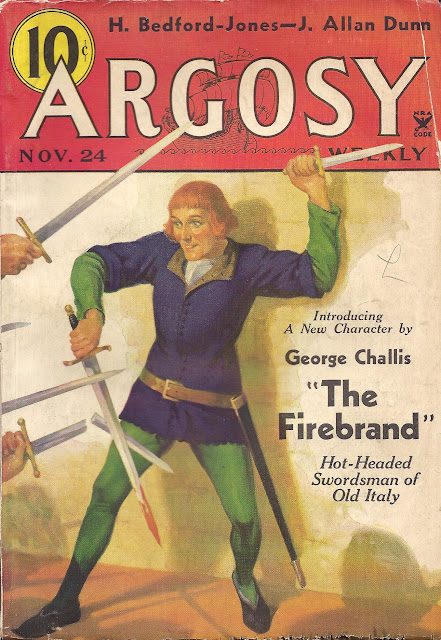 This 1934 Argosy introduces Tizzo the Firebrand, the red-haired axe-wielding Italo-British swashbuckler who took the pulp weekly by storm over the next year. George Challis was one of the many aliases employed by Frederick Faust (the best known being Max Brand). This one came to be identified with period swashbucklers, if not primarily with Tizzo. In 1935 the Firebrand appeared in two three-part serials and four novelettes from February to August. With each new story Tizzo got the cover -- an unprecedented push over so short a period. I actually wonder whether Faust switched from serials to novelettes just so he could get more covers for his character. Anyway, they're great stories or Renaissance intrigue and mayhem, and his debut had to become part of my personal pulp collection. 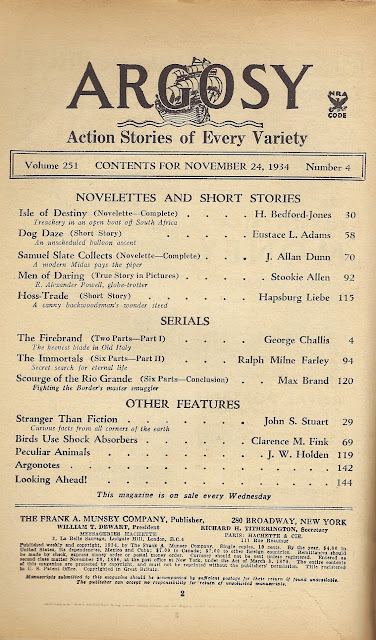 As for the rest, I like what I've read so far of Ralph Milne Farley's The Immortals, and Max Brand's Scourge of the Rio Grande, which wraps up this week, is an interesting tale of smuggling illegal Chinese immigrants across the U.S.-Mexico border, with a somewhat sympathetic Chinese villain who's raised a white girl, a friend's daughter, as his own child. H. Bedford-Jones contributes a novelette in which a family melodrama plays out amid violence on the "Isle of Destiny," while J. Allen Dunn's "Samuel Slate Collects" gives us some nigh-omnipotent avenger punishing a ruthless businessman. Eustace L. Adams' "Dog Daze" is a short story in his comic series about a drunken demonstration pilot, while Hapsburg Liebe's "Hoss-Trade" deals approvingly with a hillbilly con artist. It was pretty entertaining overall, and it was sponsored by 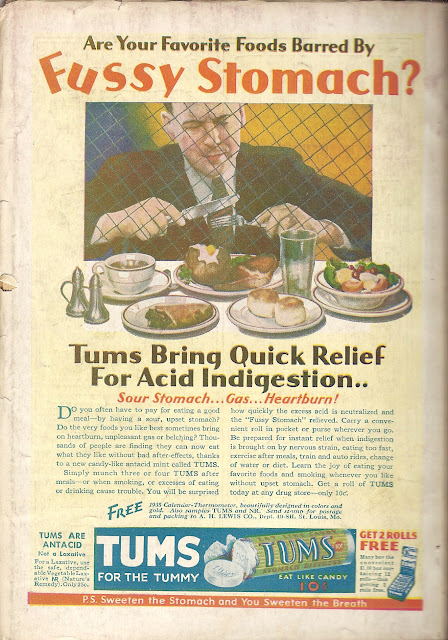