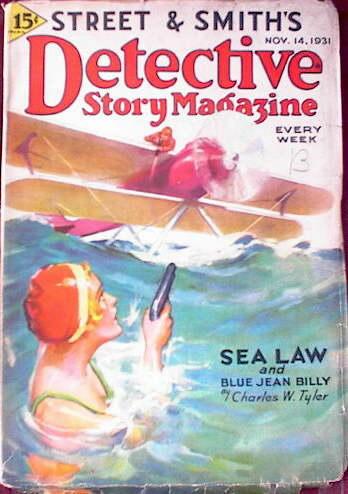 To be a twentieth century pirate all you needed was the open sea and a gun. Charles W. Tyler's Blue Jean Billy usually did have a boat -- you can tell because after her first couple of appearances, when she apparently went under the alias "Raggedy Ann," she got the cover every time she appeared in Detective Story, this 1931 issue being her last bow. Apart from being female -- and that probably isn't as atypical as I just made it look -- Billy is your typical pulp antihero, though her story may resonate more today because of the way police brutality looms large in it. From what I've read in reference works, Billy's father steered her to a life of crime in response to police brutality. Later, insensitive policing cost her a husband. Pulp fans would accept any excuse, of course, because that "crime does not pay" line didn't seem to play so well in those days for some reason.
Posted by Samuel Wilson at 12:49 PM