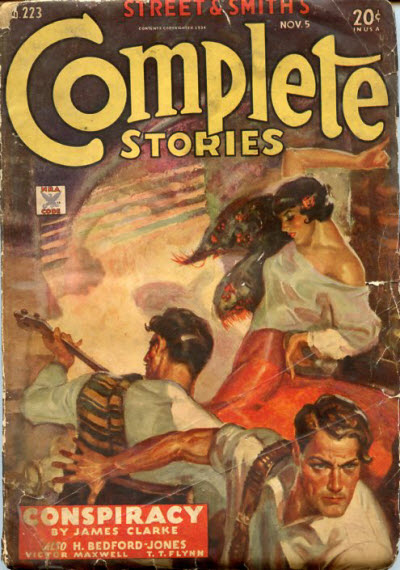 Here's Street & Smith's Complete Stories from 1934, when the magazine was publishing on an unusual every-three-weeks schedule. James Clarke, author of "Conspiracy," was one of the magazine's stars, or else an author closely identified with it, since he rarely appeared anywhere else in pulpdom. The same could not be said for the rest of this issue's lineup, led by H. Bedford-Jones, who published practically everywhere. Apart from him the most prominent names are T. T. Flynn, eventually best known for his westerns, and George Harmon Coxe, best known for photog Flash Casey of Black Mask and radio fame. Pulp regulars Victor Maxwell and C. S. Montanye are also here, as is the unfortunate Carl N. Taylor, who died in the same year and at the same age as Robert E. Howard, but by murder rather than suicide. Based on the cover "Conspiracy" looks like the sort of Latin American revolution story I usually enjoy, and the author list makes this look like a promising issue overall.
Posted by Samuel Wilson at 4:37 PM