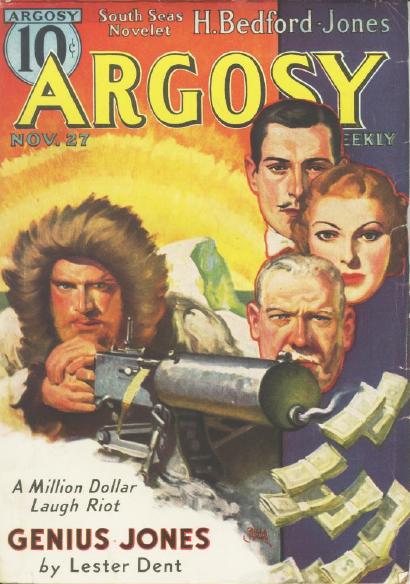 At least some contemporary pulp fans knew that the man who wrote Doc Savage under the name Kenneth Robeson was actually Lester Dent. He'd gotten his start in pulp a few years before the Man of Bronze made his debut, but Dent didn't get many opportunities to use his own byline once Doc was underway. He did manage to publish a novelette in the prestigious Black Mask in October 1936, and from December 1936 through December 1937 he placed three serials in Argosy. Genius Jones is the last of these, and the bit of it I've read is pretty bad. The title character grew up in isolation from the civilized world but was surrounded by books. Naturally he's become a human encyclopedia who doesn't always get the real meaning of words once he's brought to the modern world. I don't care much for Dent as a writer, though some of Doc Savage is hilarious when read aloud. The leaden comedy of Genius Jones does not change my impression of the author. Fortunately, this issue also offers a No-Shirt McGee novelette by Frank Richardson Pierce in which the sourdough sage recalls a youthful adventure in Siberia, as well as a novelette by H. Bedford-Jones, and serial chapters by Borden Chase and Allan Vaughan Elston, along with short stories by Edwin H. Hoover and Paul R. Morrison. This is another Argosy issue from the unz.org pulp trove, so check it out by following this link.
Posted by Samuel Wilson at 3:17 PM